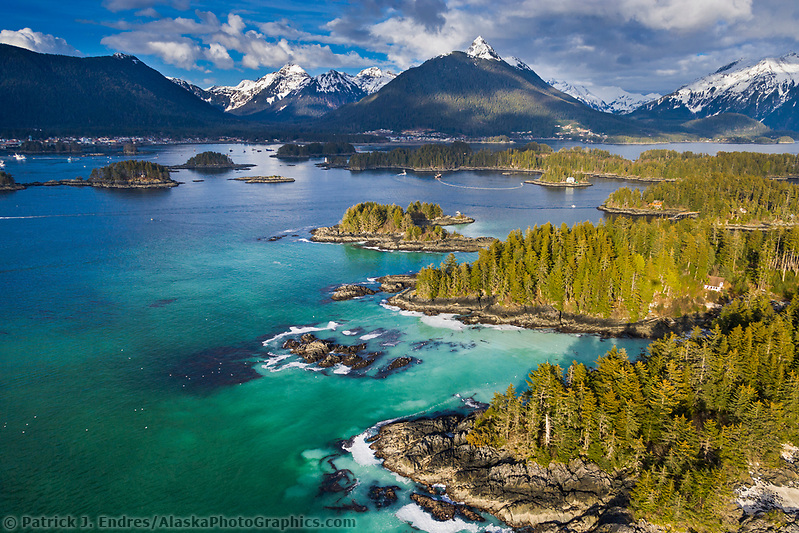 Sitka is situated on Baranof Island on the outer waters of Alaska’s Inside Passage. Surrounded by regal spruce forests reaching to the water’s edge, it is Alaska’s fifth largest city (population 8,881 – 2010 est.). Sitka embodies what many people think about when they envision a coastal community tucked away on a remote island and it is considered one of Alaska’s most beautiful seaside communities. The Sitka Alaska photos you see here may be licensed as stock photography for business use, or purchased as fine art prints for your home or office decor. 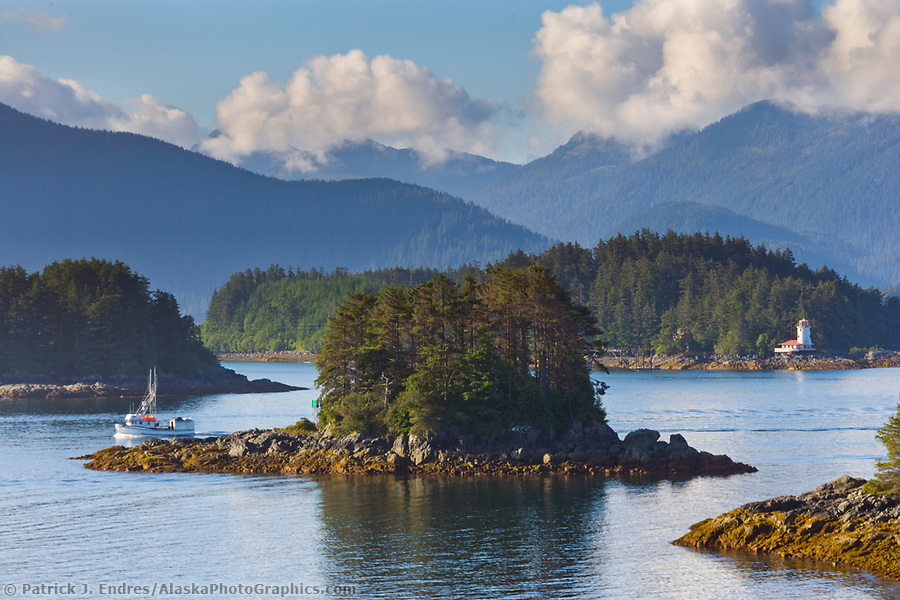 Commercial fishing boat. Rockwell Lighthouse is located on Rockwell Island in the Sitka Sound, AK. It was built in 1977 and still operates as a Bed and Breakfast Inn. Coastal community of Sitka located on Baranof Island in Alaska’s southeast panhandle. (Patrick J. Endres / AlaskaPhotoGraphics.com)

Sitka’s past is rooted in a strong Tlingit culture, with a more recent bled of Russian history. The area was originally settled by the native Tlingit Indians and later taken over by the Russians in 1804. The Sitka Lutheran Church, built in 1840, was the first Protestant church on the Pacific Coast. The Russian Orthodox Cathedral of St. Michael was founded in 1848, and St. Peter’s by-the-Sea Episcopal Church was consecrated as “The Cathedral of Alaska” in 1900. 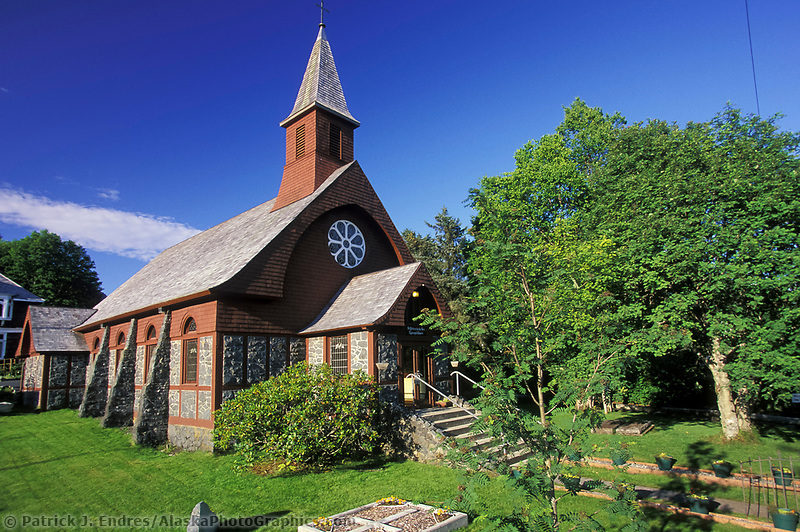 St. Peters By-The-Sea Episcopal Church, located just a block from the Russian Bishop’s House, this lovely church was built in 1899. On the church grounds is a plant grown from a cutting of the famous Glastonbury Thorn in England, Sitka, Alaska (Patrick J. Endres / AlaskaPhotoGraphics.com)

First Capital of the Territory of Alaska

Sitka was the site of the ceremony in which the Russian flag was lowered and the United States flag raised after Alaska was purchased by the United States in 1867. The flag lowering and raising event is re-enacted in Sitka every October 18 (Alaska Day). Sitka served as the capital of the Alaska Territory until 1906 when the seat of government was relocated north to Juneau. The state’s first newspaper, The Sitka Times, was published by Barney O. Ragan on September 19, 1868. 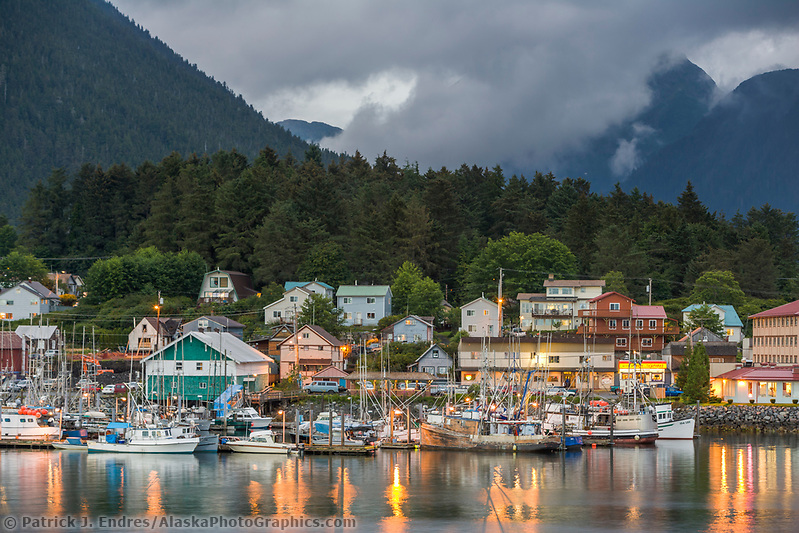 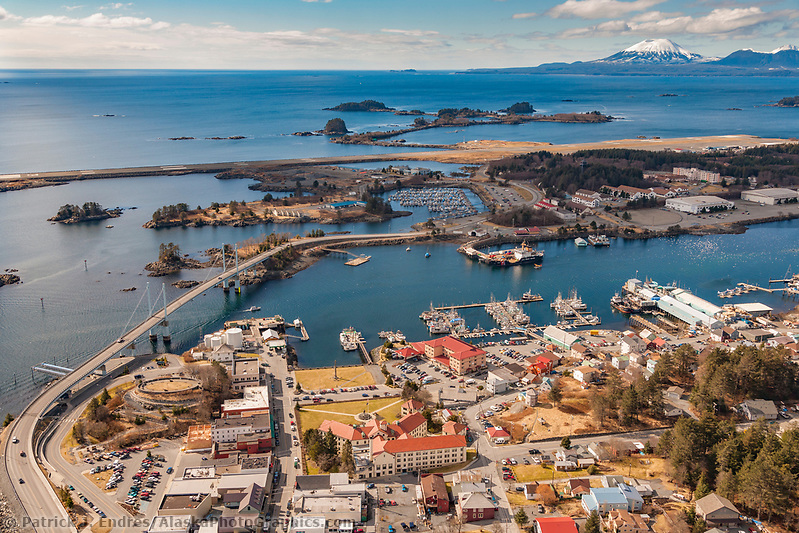 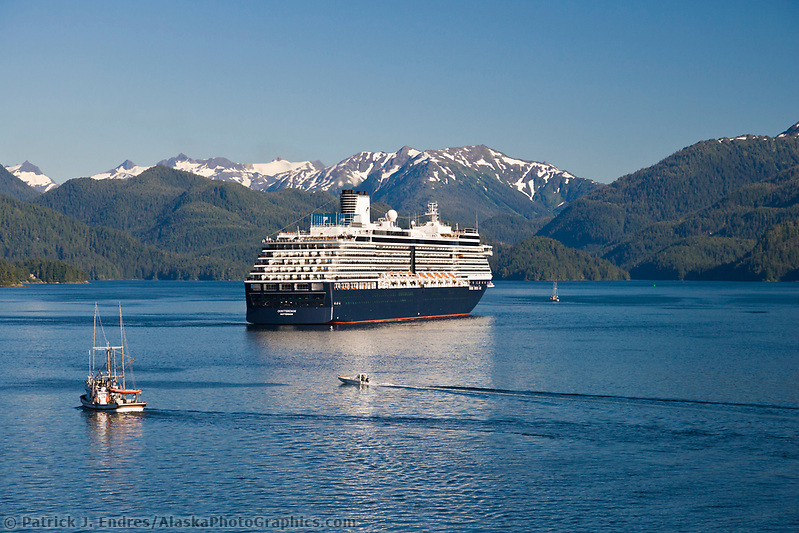 Sitka offers a combination of Native culture, Russian history, and Alaskan wilderness and lies at the heart of the largest temperate rainforest in the world, the Tongass National Forest. Many tourists visiting Alaska make Sitka a top destination on their list. Cruise ships that travel the Inside Passage visit the small community but residents have mixed feelings about the influence of industrial tourism on their small town and way of life. 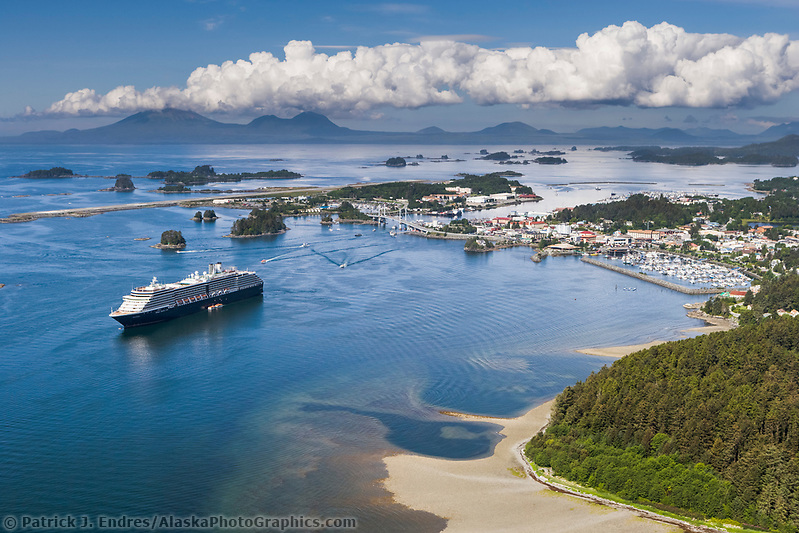 St. Michael’s Russian Orthodox church contains an important collection of Russian Orthodox art & church treasures. Built in 1844-48, it was totally destroyed by fire in January 1966. Many of the icons and religious objects were salvaged and are in the rebuilt structure. The building stands as a hallmark feature in downtown Sitka, and it is still used today for religious practice as well as tourism and education. 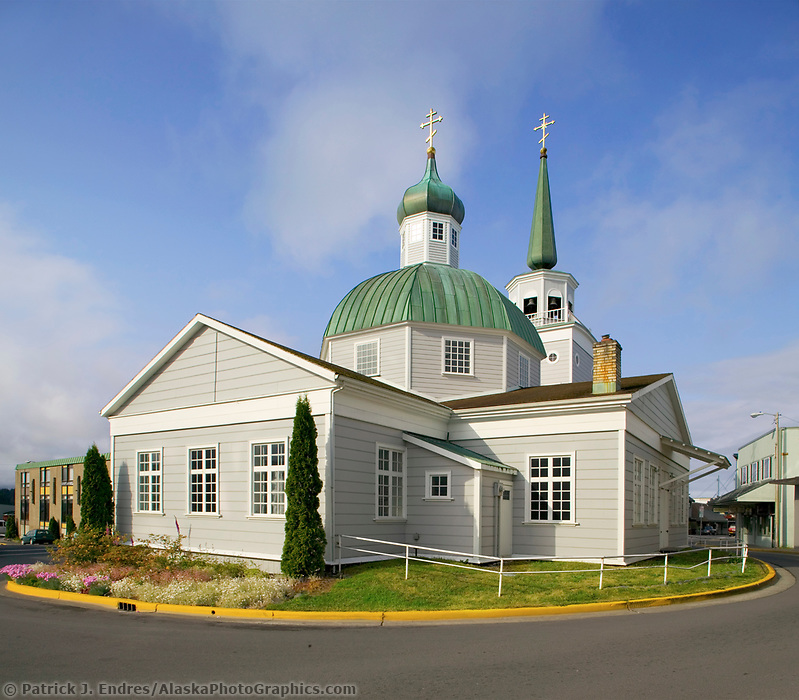 Russian Orthodox Saint Michael’s church in downtown Sitka. Built in 1844-48, destroyed by fire in January 1966. Many of the icons and religious objects were salvaged and are in the rebuilt structure Sitka, Alaska (Patrick J Endres / AlaskaPhotoGraphics.com)

The Sitka National Historical Park is a 107-acre park which preserves and interprets the site of a Tlingit Indian Fort and the battle fought between the Russians and the Tlingits in 1804. A fine collection of Haida & Tlingit totem poles were moved there from the Louisiana Exposition in St. Louis in 1904, and in April 1996, a totem carved by a local carver was raised. The museum contains an exhibit of Tlingit and Russian artifacts. There is an active Tlingit arts program where the public can watch and talk to Native Indian carvers. A free, self-guided oceanside trail leads past several totems to the site of the Tlingit fort. Of my many Sitka photos, these are some of the more popular ones. 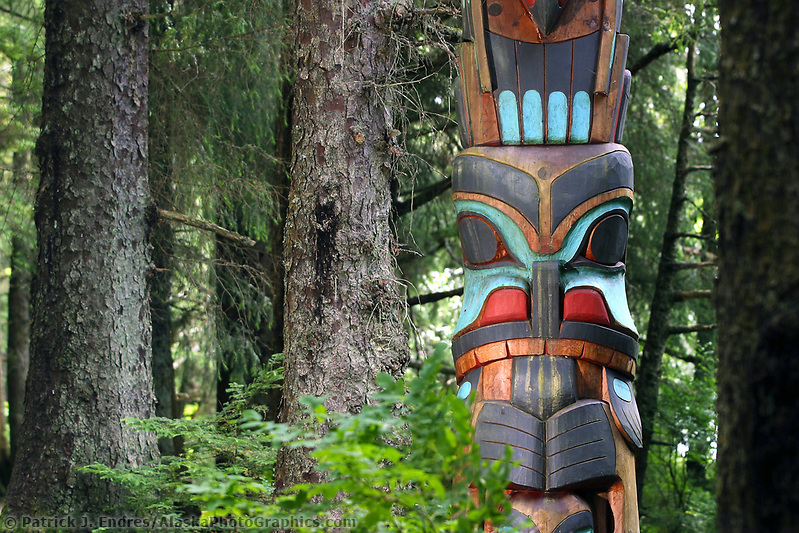 Totem in the Sitka National Historic Park. The site of a Tlingit Indian Fort and the battle fought between the Russians and the Tlingits in 1804. (Patrick J. Endres / AlaskaPhotoGraphics.com) 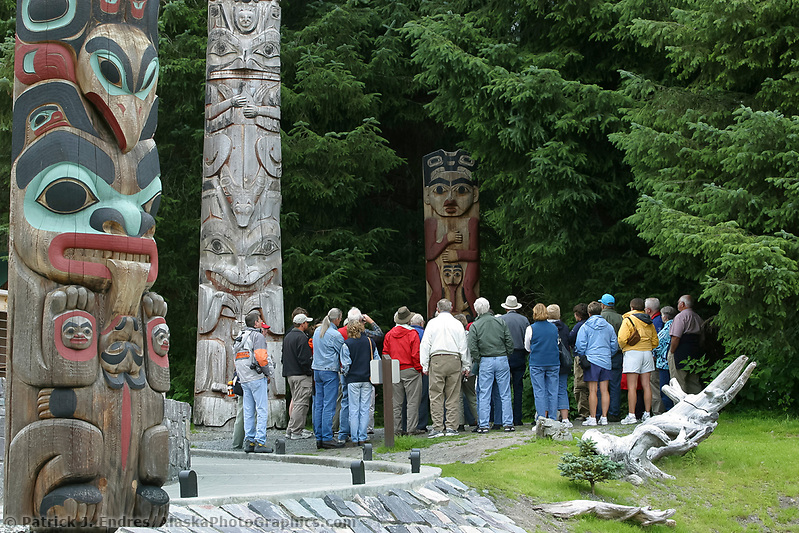 Tourists view totems in the Sitka National Historic Park. The site of a Tlingit Indian Fort and the battle fought between the Russians and the Tlingits in 1804. (Patrick J. Endres / AlaskaPhotoGraphics.com)

The Alaska Raptor Center has for years proven that dedicated volunteer effort and innovative veterinary medicine can make a life-or-death difference on Alaska’s raptors (birds of prey). The Center’s goal is to release into the wild all rehabilitated birds, however, a few never recover flight and remain housed at the Center’s outdoor display. 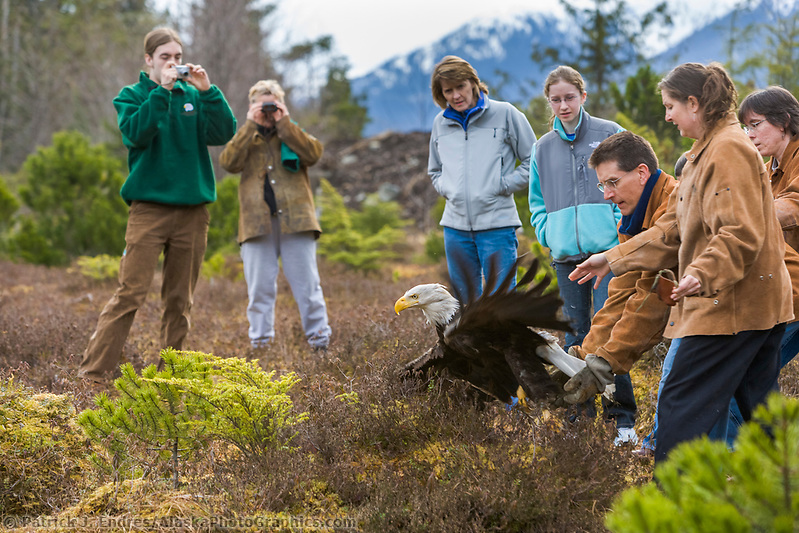 Recovered bald eagle is released back into the wild at the Alaska Raptor Rehabilitation Center in Sitka, Alaska. (Patrick J Endres / AlaskaPhotoGraphics.com)

Constructed on a site that once housed the Indian Government School, the Community House offers Native dance performances in full regalia, storytelling, cultural events, and a gift shop with authentic Native artwork. Located on Katlian St., next to the tribal house). 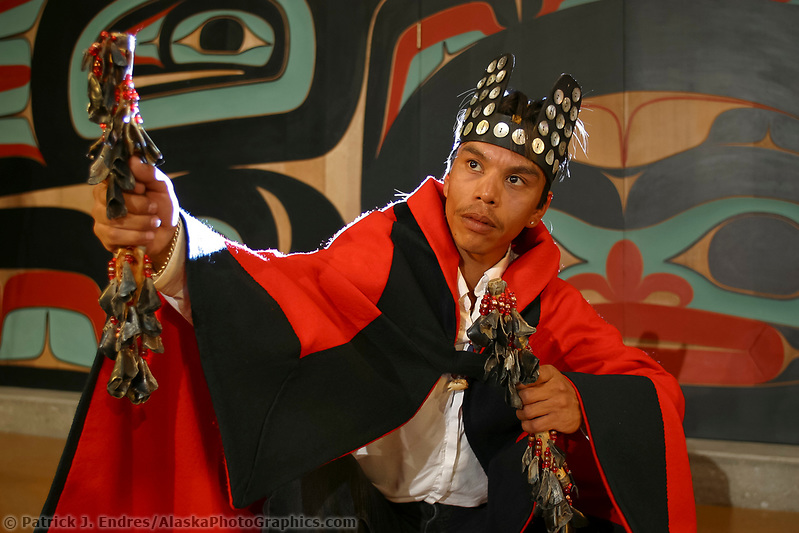 According to the National Marine Fisheries Service, Sitka is the ninth most valuable commercial fisheries port in the nation and fourth in Alaska with $43.3 million dollars passing through its port in 2004. These include Salmon, Sac Roe Herring, Halibut, and Groundfish.

The Sitka Sac Roe Herring Fishery is a popular, although very brief fishery that takes place every March in the waters surrounding Sitka. I’ve made several trips to photograph the fleet in action, which is generally a “hurry up and wait” experience, as the fleet waits for the opening announcement by the Alaska Department of Fish and Game. Herring are caught in purse seine nets during a brief window of time, and the eggs are harvested from the fish and sold to primarily Asian markets. The remaining fish parts are ground up and used as a by-product. These Sitka photos tell quite the story of a classic but competitive fishery. 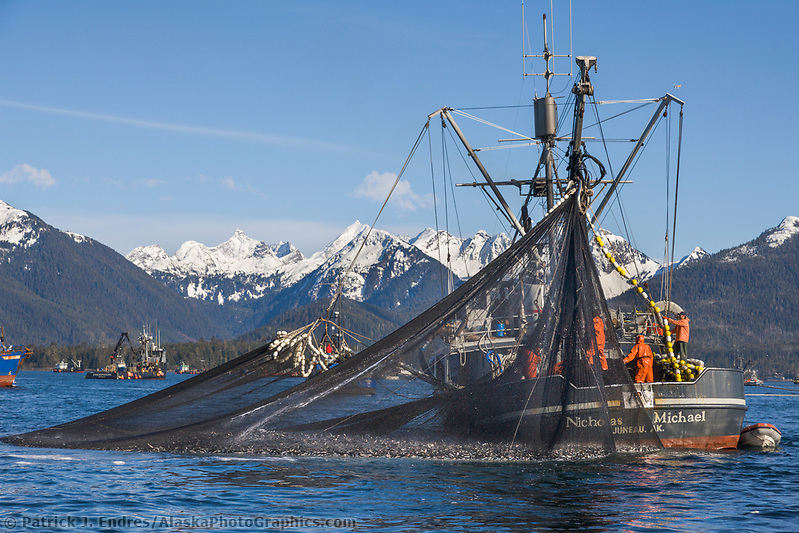 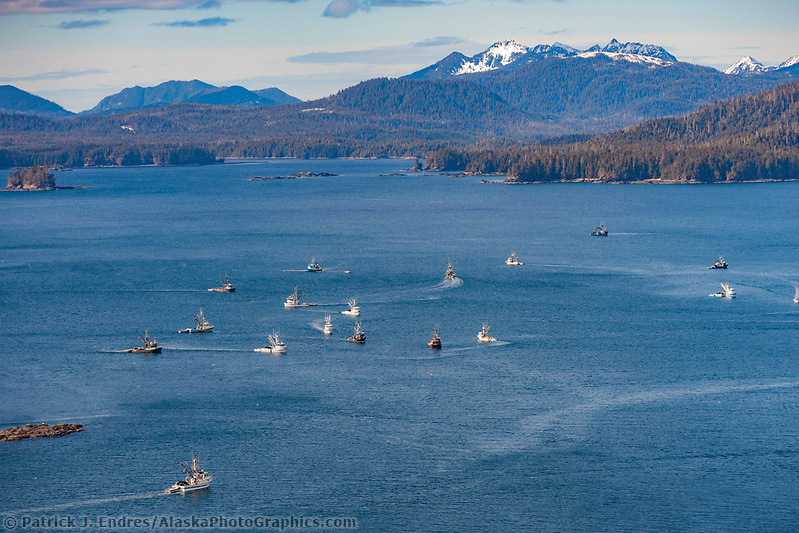 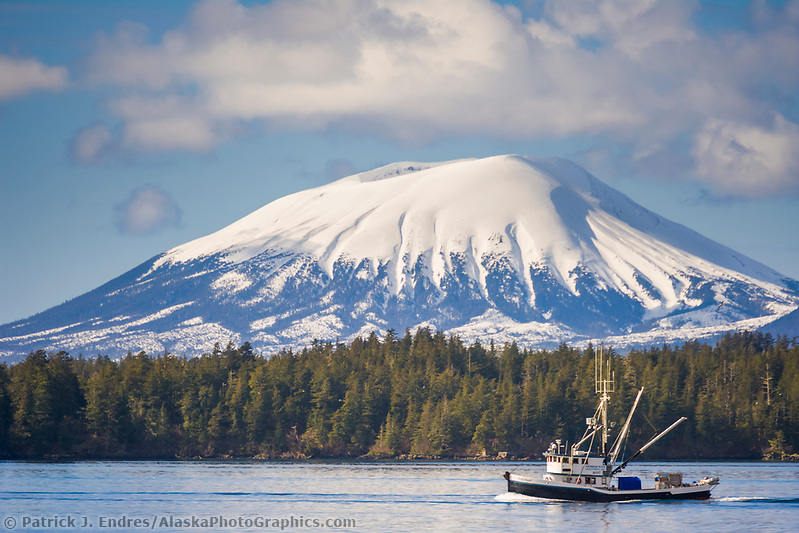 Sitka is home to a number of salmon trollers and is one of the only Southeast Alaska communities that does not derive most of its fisheries income from its purse seine fleet. Salmon is the most valuable fishery in Sitka, but halibut and sablefish fall close behind. Sitka’s troll fishery is known to bring in high-quality salmon. 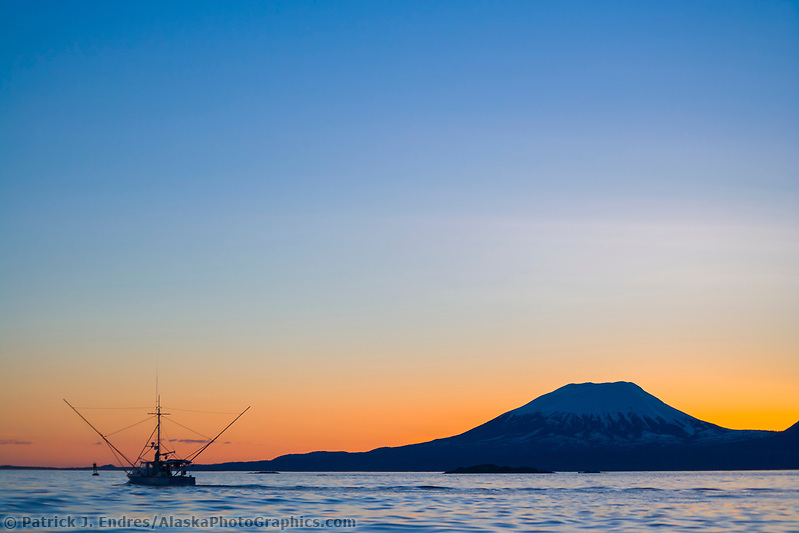 The sport-charter fishing fleet has grown in the recent years to offer services to the tourism industry, introducing some conflict in the community. 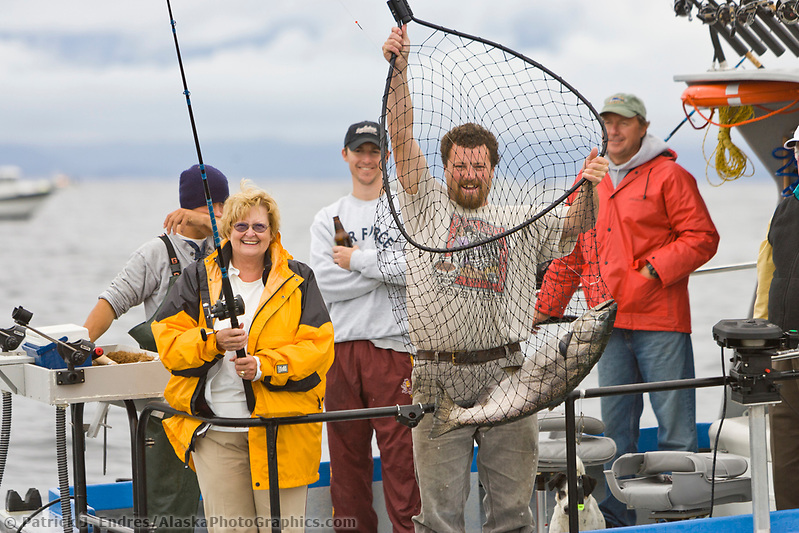