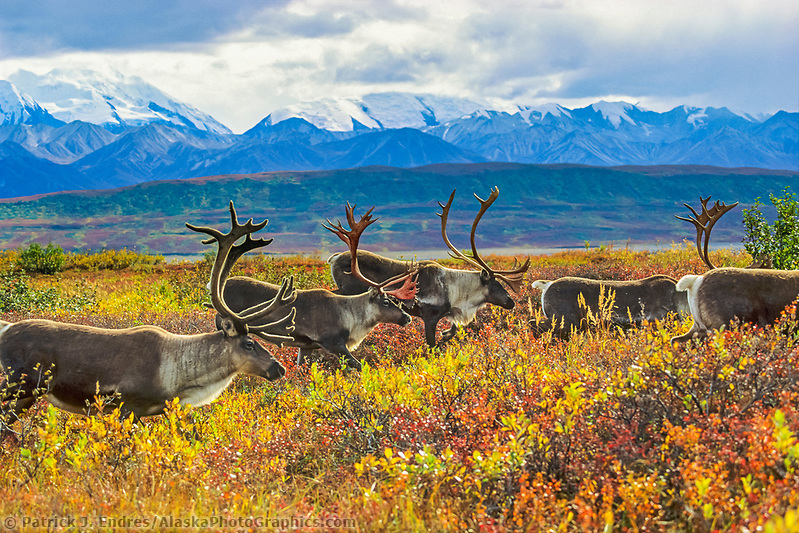 Barren ground caribou tell the ultimate story of a great land mammal migration. They travel across mountains and tundra for hundreds and even thousands of miles to find food and raise their young. They are uniquely equipped to survive the Arctic conditions and travel over the tundra landscape in all its seasons. The caribou photos here are available to license as stock photos for your commercial publishing needs or to purchase as fine art prints to decorate your home or office. They were photographed during my many excursions across Alaska. 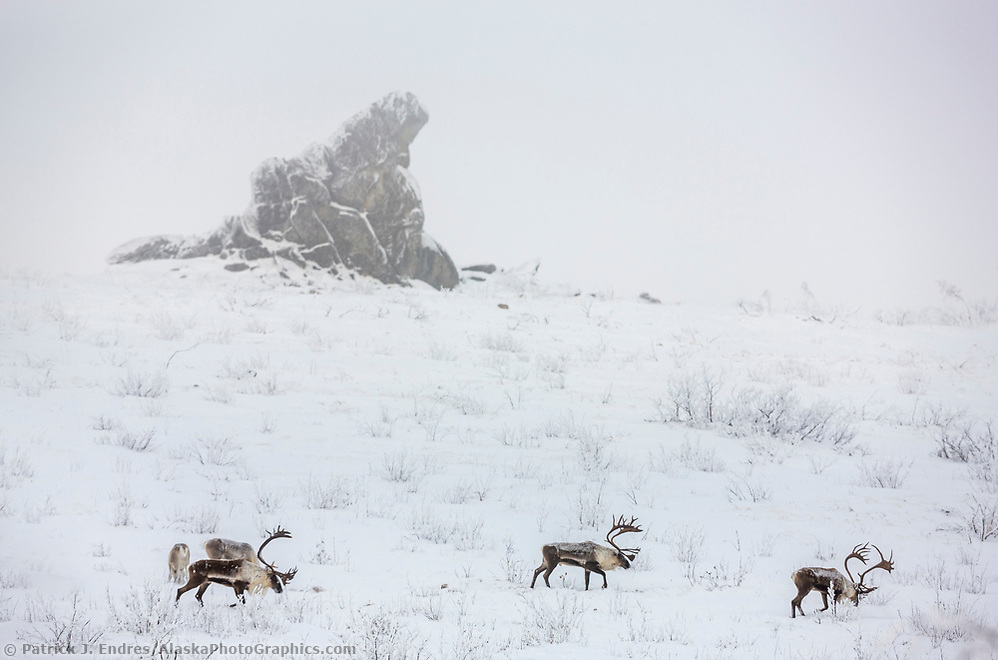 Caribou live in the Arctic and mountain tundra, and northern forest regions of Alaska. Scientists have classified the Alaska caribou population into 32 distinct herds. According to a recent population survey in 2017, (ADF&G) Alaska’s largest caribou herd, the Western Arctic Caribou herd showed the first sign of an increase in years and is now at 259,000 animals. The Alaska Department of Fish and Game has classified the Alaska caribou population into 32 distinct herds. 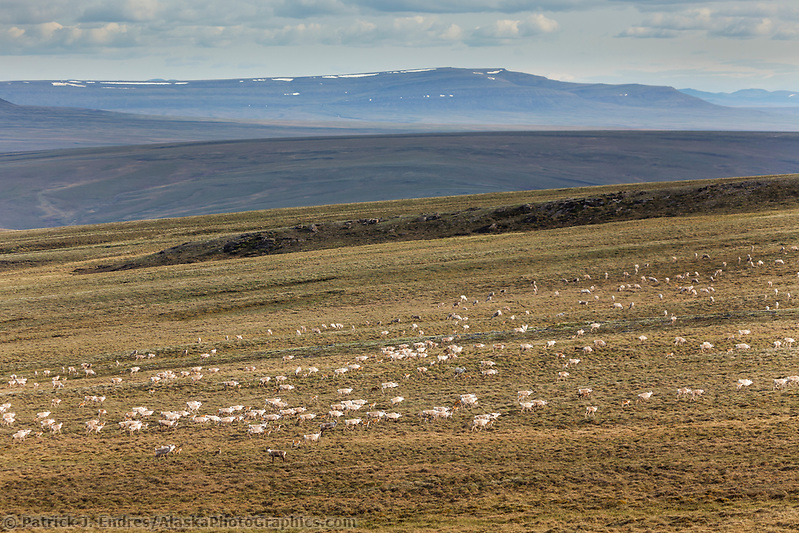 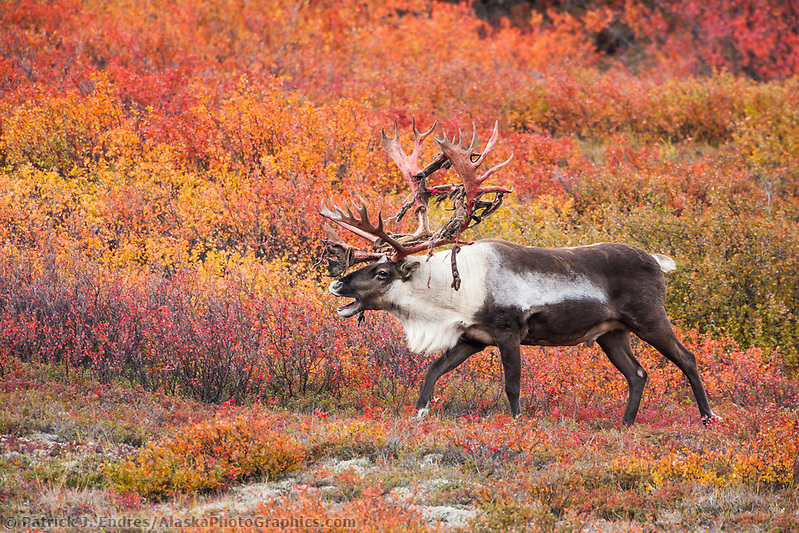 Caribou shed their winter coat in spring and summer, and by late autumn their fur is darkish-brown with a white neck, rump, and often have a white flank stripe. Newborn calves are generally reddish-brown and weigh an average of 13 pounds (6 kg). Adult males average 350-400 pounds (159-182 kg), and females average 175-225 pounds (80-120 kg). 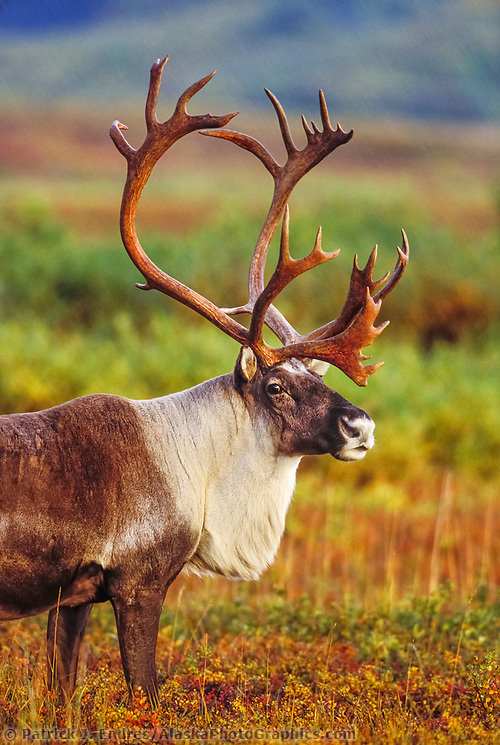 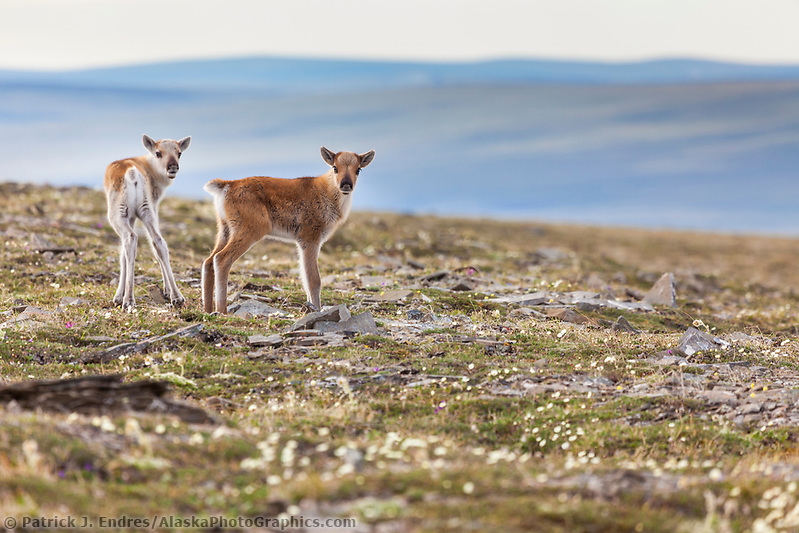 Caribou calving occurs in mid-late May in Interior Alaska and in early June in northern and southwestern Alaska. Females begin breeding at the age of 16 to 28 months. Predation can take a heavy toll on caribou calves, as wolves, grizzly bears, and golden eagles kill large numbers of newborn calves. 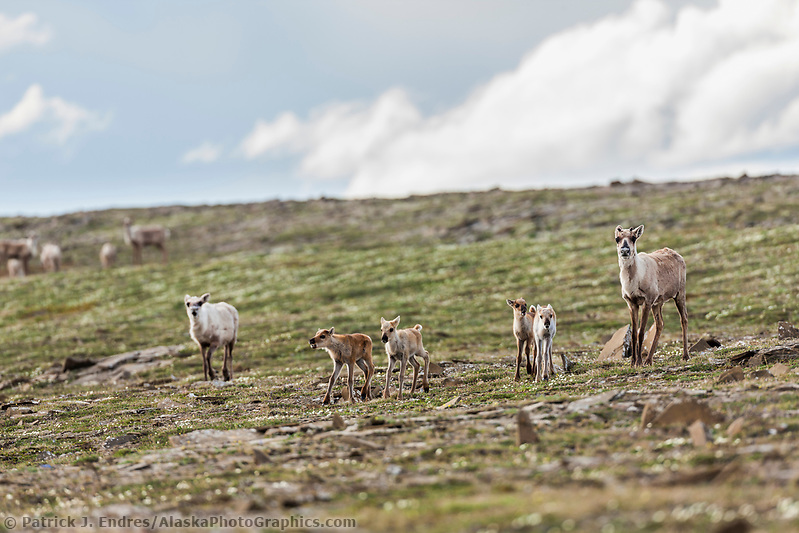 After calving, caribou congregate in large “post-calving aggregations” to avoid predators and escape pesty insects like mosquitoes and warble flies. These large groups of caribou stay together in the high mountains and along seacoasts where wind and cool temperatures protect them from summer heat and bugs. After insect numbers decline in August, caribou disperse to feed on willow leaves and mushrooms to regain body weight in preparation for winter. 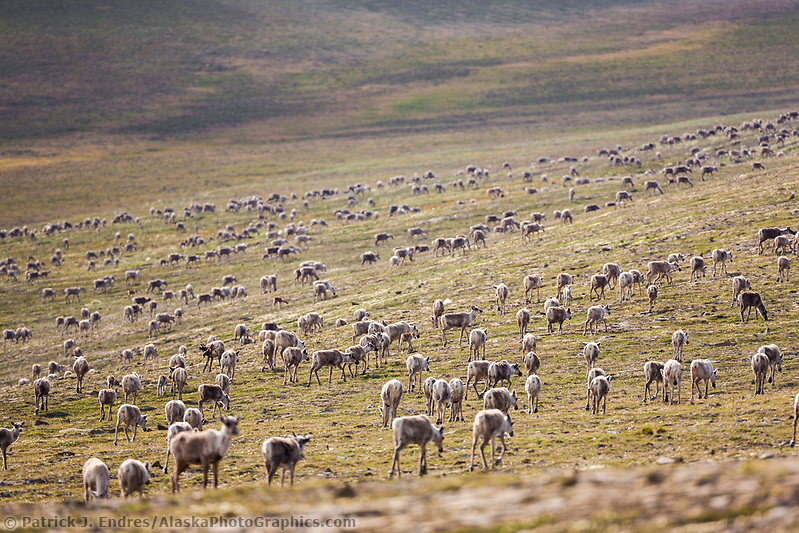 Mating and the Rut

Mature bulls frequently have more than three inches of fat on the back and rump, which provides the energy needed during the rut. Fighting begins in early September and becomes more frequent as the rut approaches at the end of the month and into early October. Most fights between bulls are brief bouts, but violent fights can occur, and many bulls are seriously injured or killed during the rut. Many injured or exhausted bulls are killed by wolves and bears after the rut. 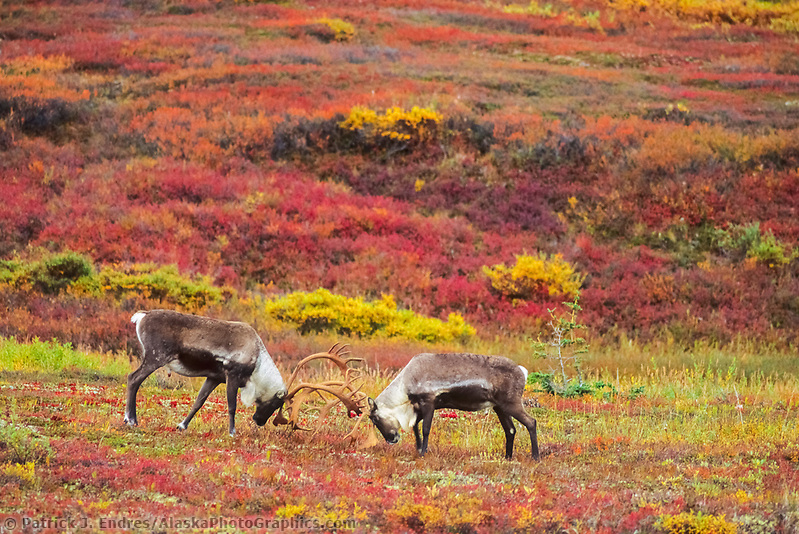 Like most herd animals caribou keep moving to find adequate food. Large herds often migrate long distances (up to 400 miles/640 km) between summer and winter ranges. Smaller herds may not migrate at all. In summer, caribou eat the leaves of willows, sedges, flowering tundra plants, and mushrooms. They switch to lichens, dried sedges, and small shrubs in September. 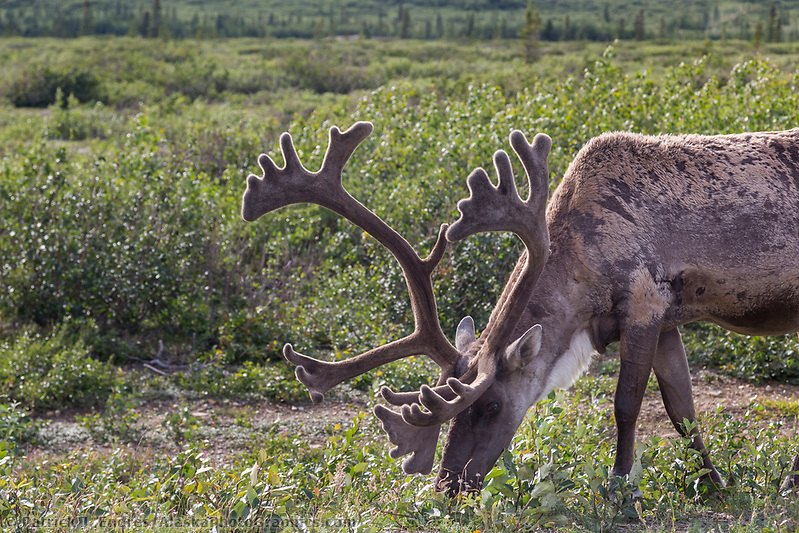 Caribou prefer treeless tundra and mountains during all seasons, but many herds winter in the boreal forest (taiga). Calving areas are usually located in mountains or on open, coastal tundra. Caribou tend to calve in the same general areas year after year, but migration routes may change in favor of new areas with more food. 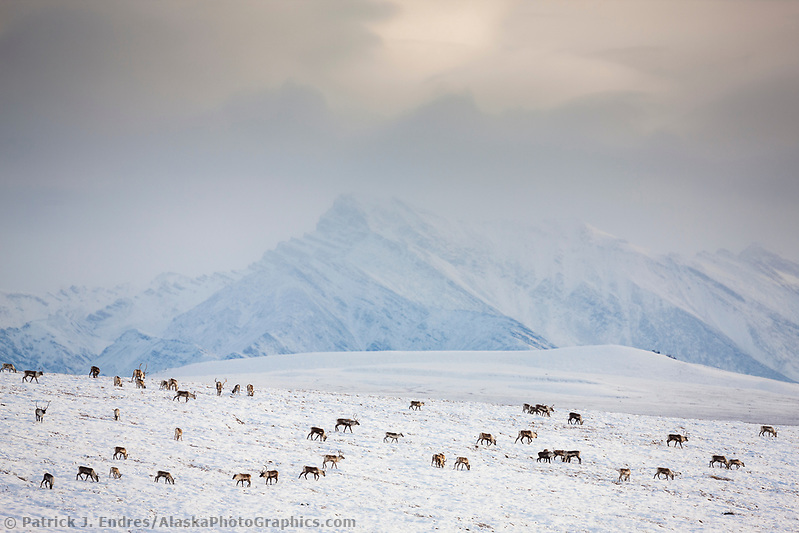 There are approximately 950,000 wild caribou in Alaska (ADF&G, including some herds that are shared by Alaska and Canada’s Yukon Territory). Caribou are somewhat cyclic in number, but the herd size variations are not very predictable. Overhunting, climate, overpopulation, predation, and disease outbreaks determine whether most herds increase or decrease. 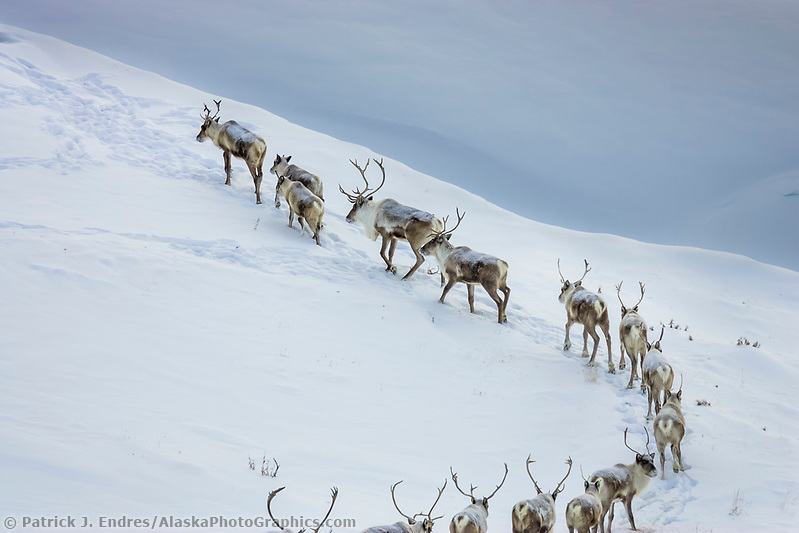 Where to photograph Alaska’s caribou

Perhaps the easiest location to take caribou photos in Alaska is Denali National Park. Although the population of the herd there has diminished, both the habituated animals and the park road access create excellent photography options. In addition, the very scenic mountain backgrounds throughout the Park provide a stunning photography setting. 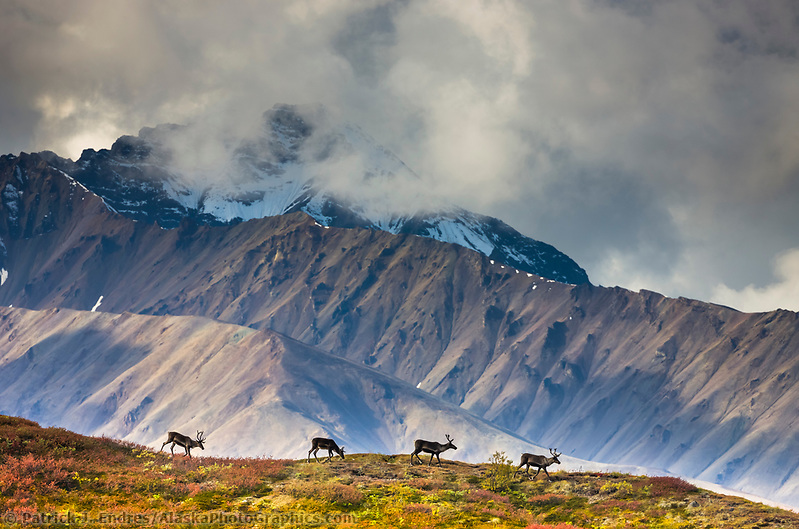 The caribou herd populations in the Arctic are large (Western Arctic, Teshekpuk, Central Arctic and Porcupine herds). While photographing the epic caribou migrations in that region can be an amazing experience, it is logistically challenging and difficult to predict. Variations in migration patterns, along with expensive bush plane travel further complicates the process. All of the veteran pilots and longtime residents of the area will tell you that caribou migration is unpredictable and if that your goal, make sure you have a lot of patience and perseverance. 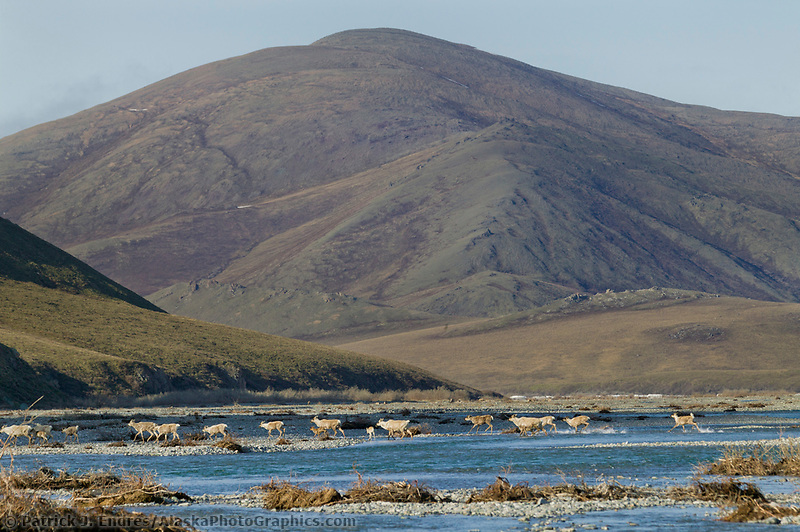 The Dalton Highway and Hunting

Caribou hunting along the James Dalton Highway which transects the Brooks Range in Arctic Alaska has increased considerably in recent years. This is primarily due to the recent hunting law that enables bow hunting from the Dalton Highway. This has changed the behavior of the animals in that road corridor region. Successfully taking caribou photos is more difficult when they stay further from the road due to hunting pressure. 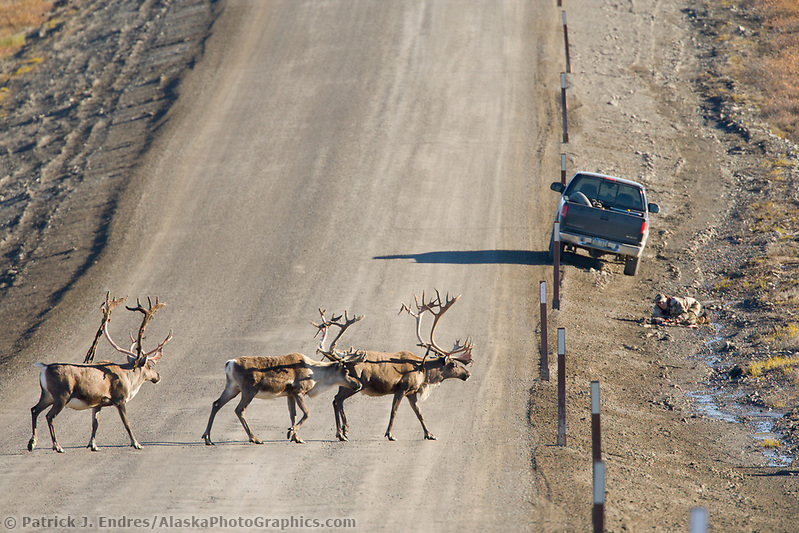 Bowhunter hides along the shoulder of the James Dalton Highway (Haul Road) waiting for the right moment to shoot a caribou crossing the road. (Patrick J. Endres / AlaskaPhotoGraphics.com)

When to Photograph Caribou?

Since many of the large herds of caribou migrate, seasonal times of year that target that event can be strategic times for photography. In the spring month of early June, caribou move to their calving grounds to give birth. If young animals are a point of interest, this is the time of year to target. 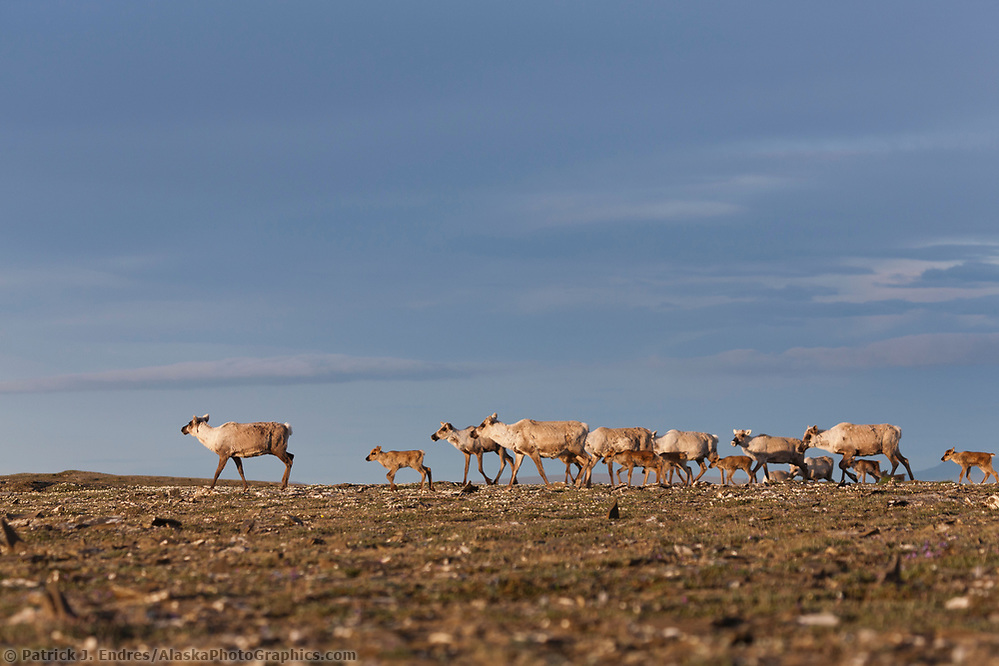 The latter August and September months are favored by many photographers because the caribou have a fresh, thick hide, in preparation for winter. In addition, their antler velvet begins to shed in late August and sparring between males begins as the rut season approaches. In general, caribou are pretty curious animals, and if you take your time and approach them very slowly, with long waits between movement, you can get within a reasonable distance to capture good caribou photos. This, of course, is especially true in areas lacking hunting pressure. 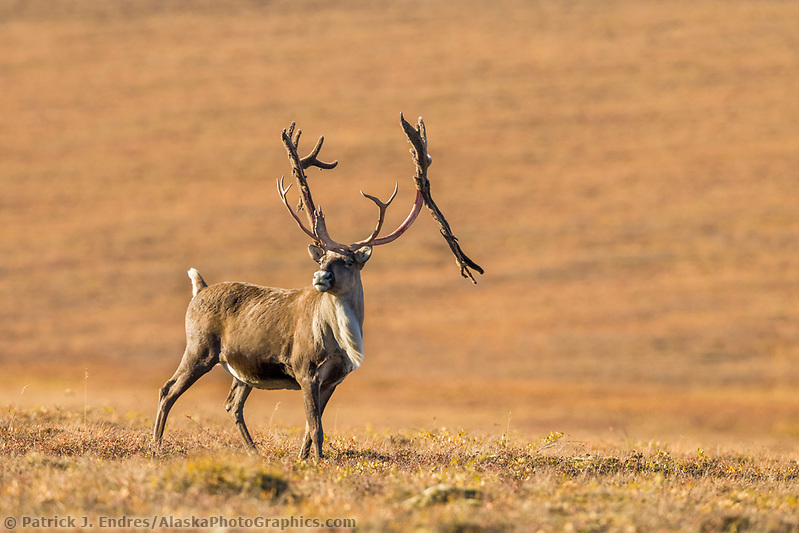