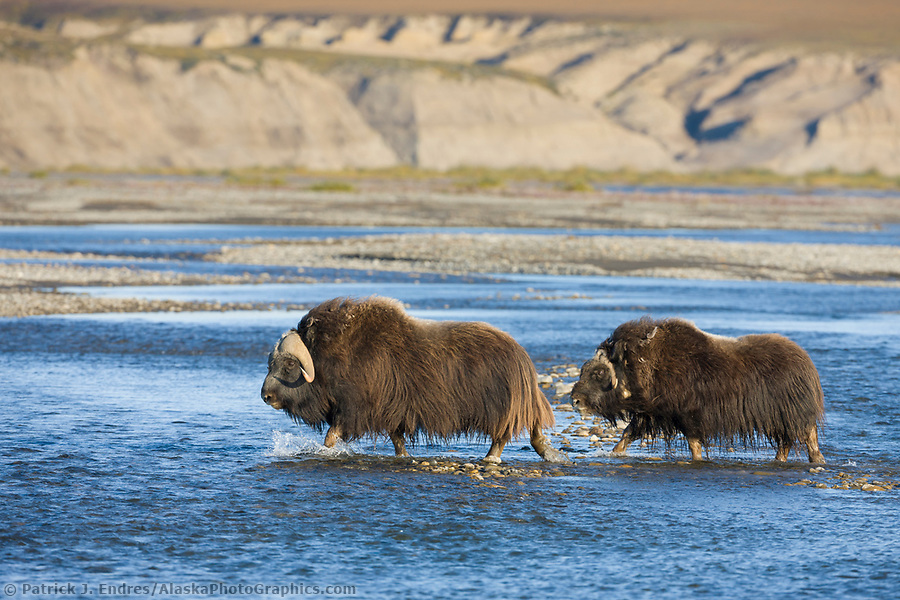 Muskox along the Sagavanirktok river and the Franklin Bluffs on the Arctic coastal plains, Arctic, Alaska. (Patrick J. Endres / AlaskaPhotoGraphics.com)

The muskox photos here were taken in all seasons, on Alaska’s Arctic North Slope and on the Seward Peninsula in western Alaska. Taxonomists now classify muskox with the sheep and goats. Musk oxen as a species have changed little since the ice age and are perfectly adapted to live in their harsh Arctic environment. All photographs on this site are available for purchase as commercial stock photography or fine art prints for your home or office. 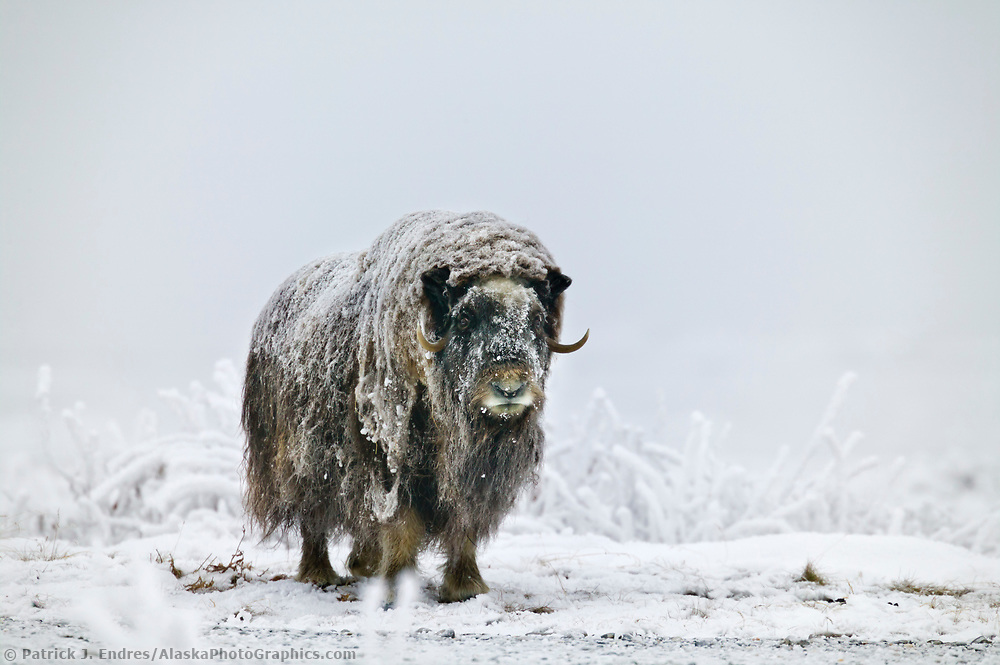 The muskox is a stocky, long-haired animal with a slight shoulder hump and a very short tail. The pelage consists of a long, coarse, outer layer and a short, fine under hair. The coloration is generally dark brown with creamy-colored hair on the “saddle,” forehead, and legs. Mature bulls are about 5 feet high (1.5 m) at the shoulder and weigh 600 to 800 pounds (273-364 kg). Cows are smaller, averaging approximately 4 feet (1.2 m) in height and weighing 400 to 500 pounds (182-227 kg). The name “muskox” is misleading because the animals have no musky odor. 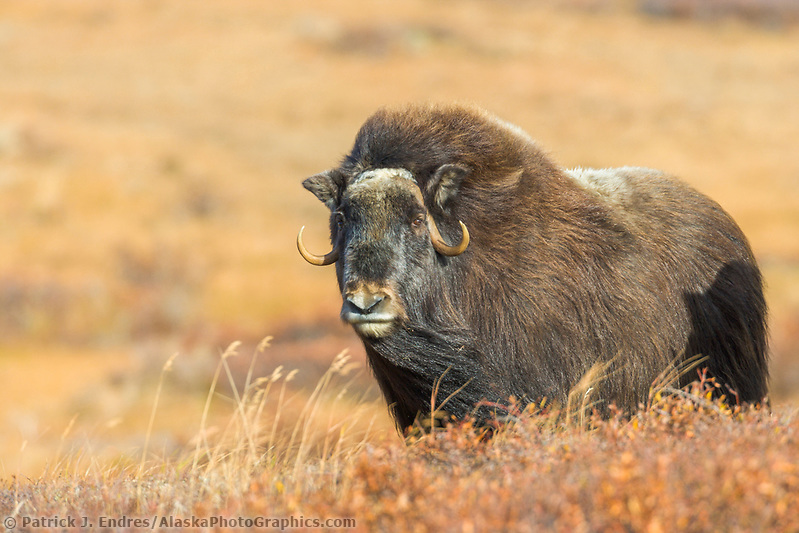 The growth of young Muskoxen is rapid and the animals weigh 150-235 pounds (68-107 kg) as yearlings. Muskoxen are gregarious animals. Winter herds may include up to 75 animals. Smaller harem groups which form during the mating season contain from 5 to 15 females and subadults, with one dominant bull who prevents other adult bulls from entering the group. Bulls excluded from these breeding herds wander widely in search of a harem but generally rejoin mixed-sex herds in winter. However, some non-breeding bulls may segregate into bull-only herds during spring. 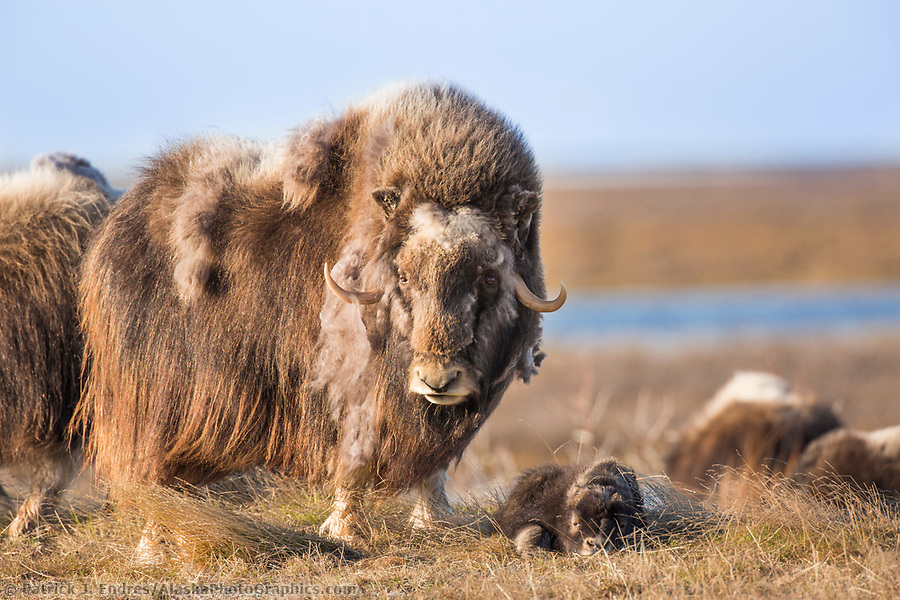 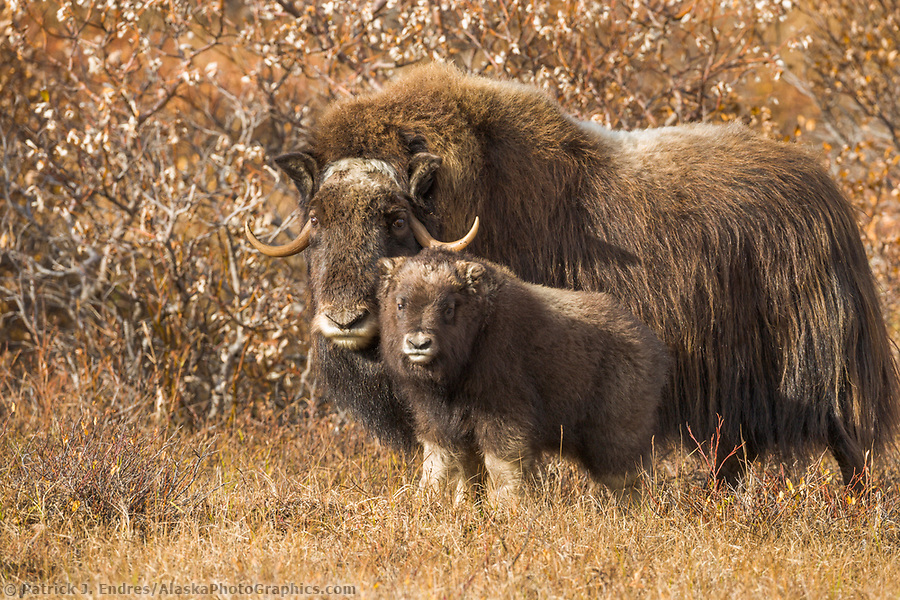 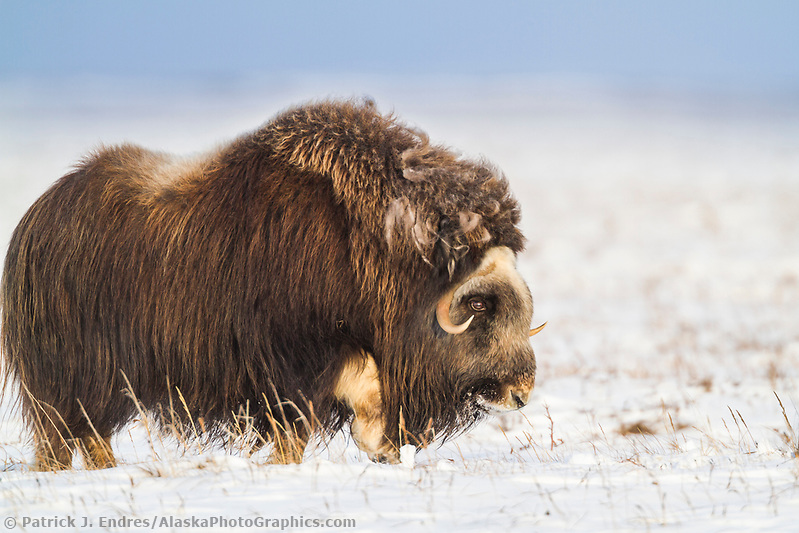 Battles between bull muskoxen during the rut are spectacular and violent contests. After a period of aggressive display, the bulls charge at top speed from distances of 50 yards (46 m) or more and collide squarely on the horn bosses. The sound can be heard from a mile away on a calm day. After a clash, the bulls back away from each other swinging their heads from side to side and repeat the sequence until one bull turns and runs. A battle may include 20 clashes. Bull muskoxen have heavily armored skulls to protect them from the shock of impact. Four inches of horn and three inches of bone lie directly over the brain in the area of contact. 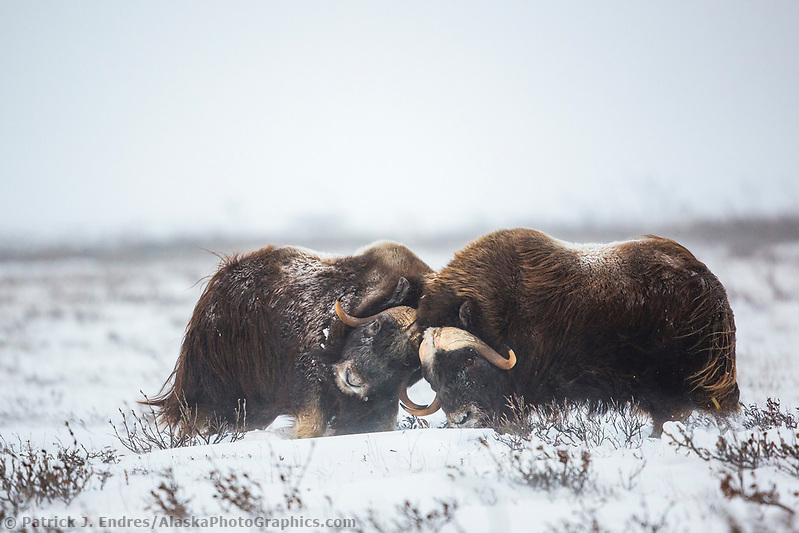 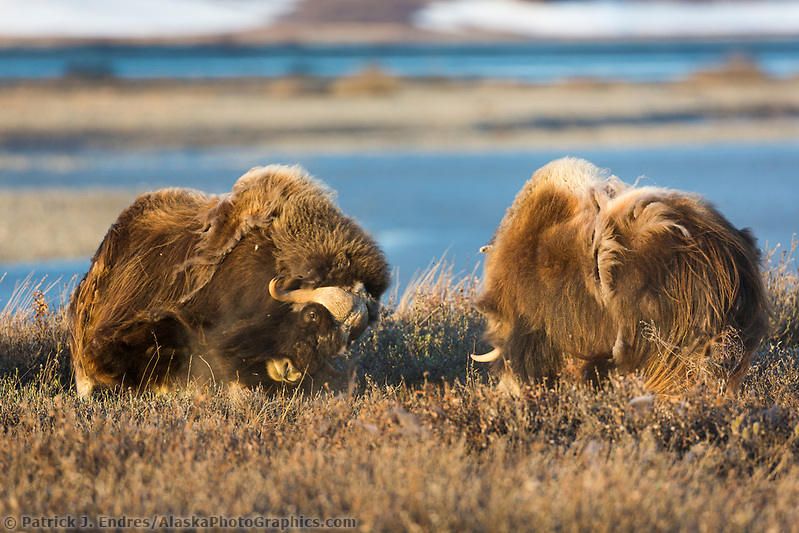 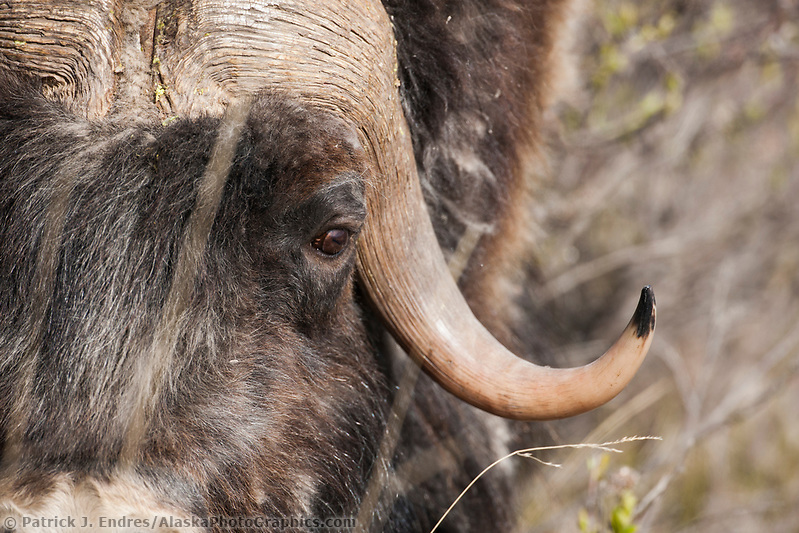 When danger approaches, muskoxen run together. Every animal tries to face the source of the threat. If only one predator is nearby, the defense formation takes the form of a line. If several predators surround the group, as with a wolf pack, the formation becomes a compact circle with all muskoxen facing outward. Occasionally, one or more animals will charge the predator. The muskox’s defense strategy is extremely effective against its principal enemy, the wolf. Unless the herd stampedes, it is nearly invulnerable to wolf attack. Early human hunters soon learned to exploit this defensive behavior and with the aid of dogs were easily able to wipe out whole herds of muskoxen. Whalers and arctic exploring parties, using the same techniques, took a heavy toll of muskoxen in some regions. 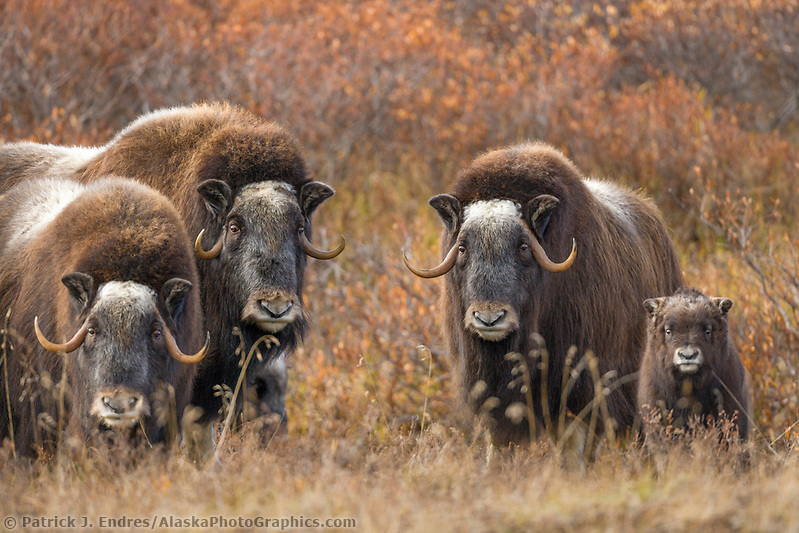 Muskoxen eat a wide variety of plants, including grasses, sedges, and woody plants. Muskoxen are poorly adapted for digging through heavy snow for food, so winter habitat is generally restricted to areas with shallow snow accumulations or areas blown free of snow. 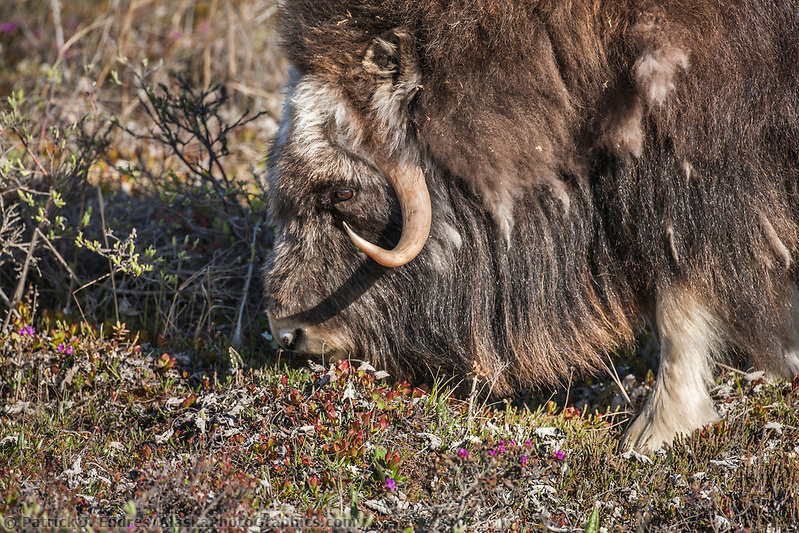 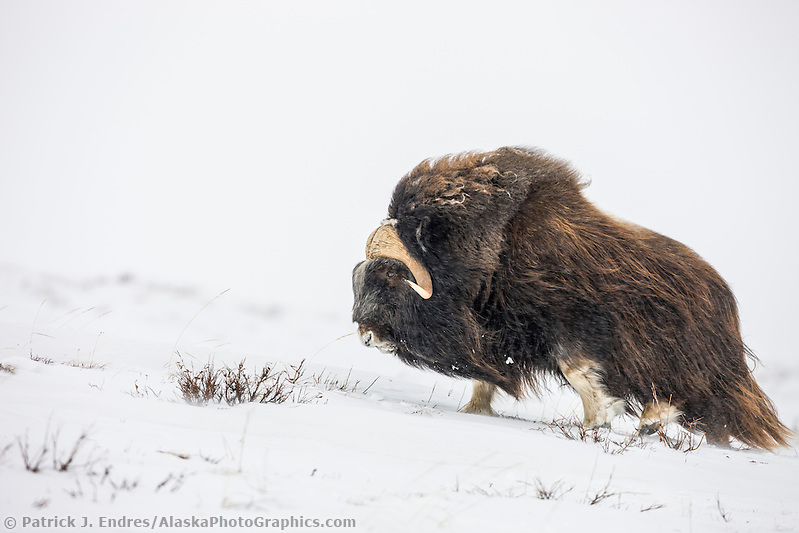 The original Alaska muskoxen disappeared in the mid- or late 1800s as they had much earlier in Europe and Asia. Overhunting likely contributed to their demise, at least in some areas. In 1930, 34 muskoxen captured in East Greenland were brought to Fairbanks. In 1935 and 1936, all survivors and their calves were transported from Fairbanks to Nunivak Island and released. Muskoxen thrived on Nunivak Island and increased from 31 in 1936 to an estimated 750 by 1968. Nunivak Island muskoxen have been transplanted to the Arctic National Wildlife Refuge, Cape Thompson, the Seward Peninsula, Nelson Island, and to Wrangel Island and the Taimyr Peninsula in Russia. Most of the transplanted animals quickly adapted to their new surroundings and increased. 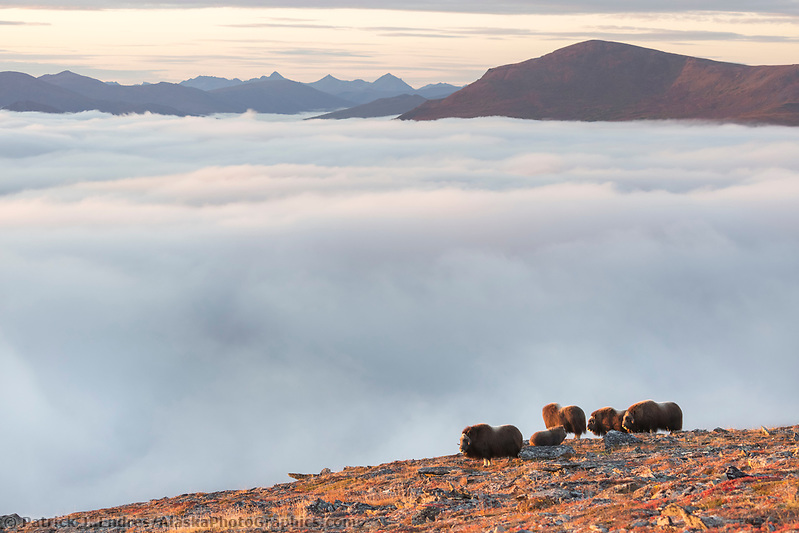 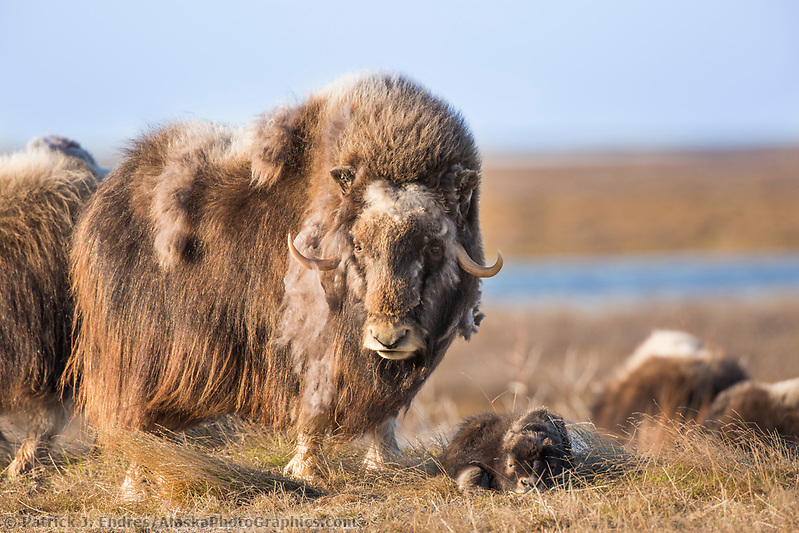 In 1990, approximately 2,220 free-ranging muskoxen resided in Alaska: 500 on Nunivak Island, 220 on Nelson Island, 500 in northern Alaska, 130 in northwestern Alaska, 700 on the Seward Peninsula, 150 on the Yukon-Kuskokwim Delta, with an additional 105 animals in captivity in domestic herds, research herds, and the Alaska Zoo in Anchorage. The Nunivak Island and Nelson Island populations have been stabilized by hunting; the other wild populations are expected to continue to increase and to expand their range. 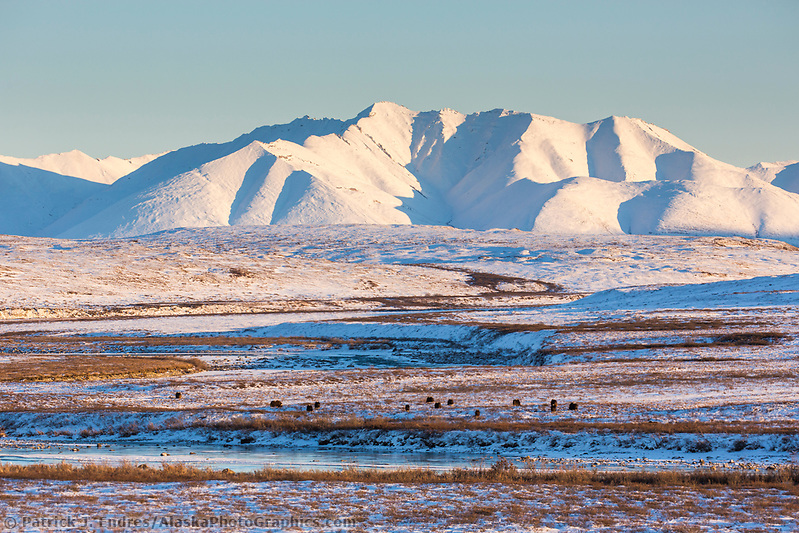 A herd of muskoxen on the tundra in the Brooks Range mountains, Arctic, Alaska. (Patrick J Endres / AlaskaPhotoGraphics.com)

The soft brownish wool-like under hair, or “qiviut,” has been called the rarest fiber in the world. A domestic muskox herd at Palmer is farmed exclusively for the production of qiviut, but Eskimos on Nunivak Island collect the naturally shed wool clinging to bushes and tundra plants and spin it by hand. 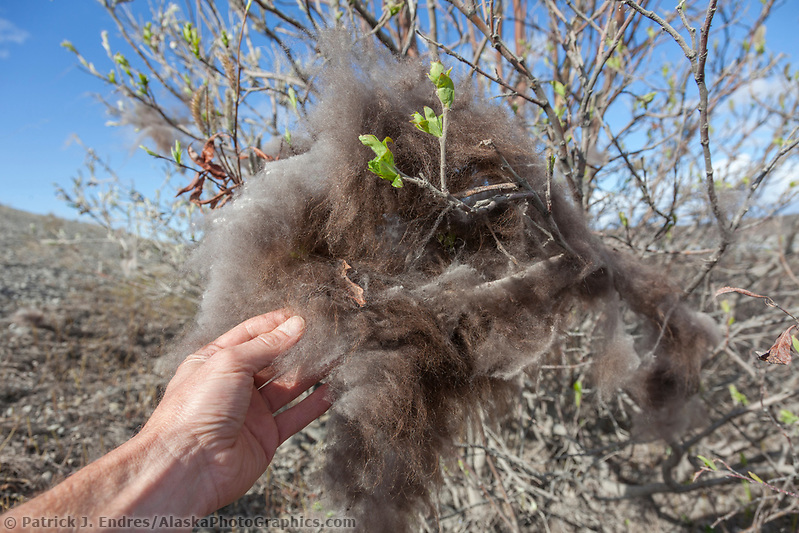 Text adapted from the State of Alaska Fish and Game Wildlife Notebook Series.