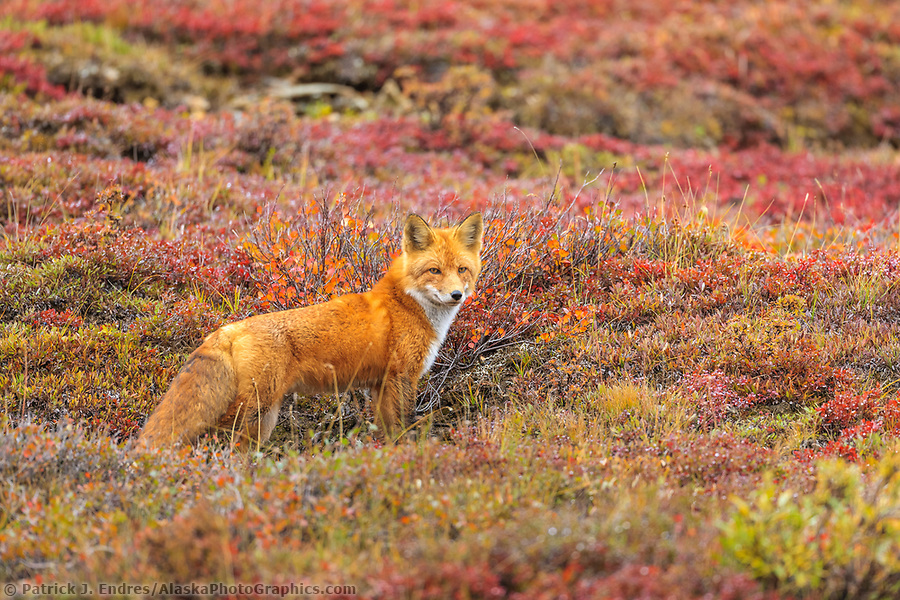 The red fox appears in different color phases but they are all the same species Vulpes vulpes. They can appear black, red, silver or various mixtures of black and red. Red fox inhabit most of Alaska except a few of the islands in southeast Alaska. All of the red fox photos on this site may be licensed as stock photography for business use, or purchased as fine art pictures for home or office decor. 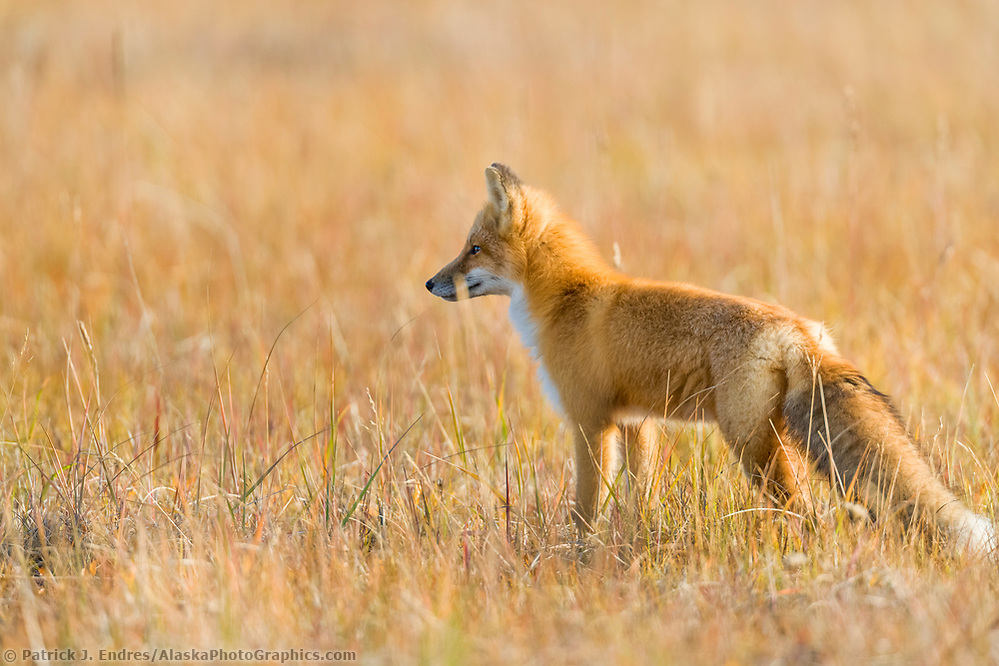 The red fox is the subject of many stories, songs, fables, and parables. It is a handsome animal with a reputation for intelligence largely due to its well-developed senses of sight, smell, and hearing. The fox prefers broken country, extensive lowland marshes, and crisscrossed hills and draws. It is most abundant south of the arctic tundra but in recent years has encroached further north into the tundra regions of the Arctic fox (Vulpes lagopus). Where the ranges of the two species overlap, the red fox is dominant. 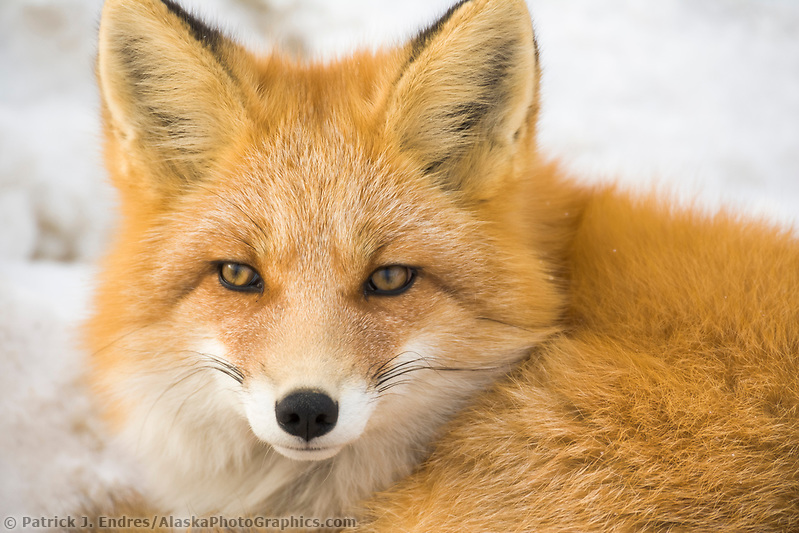 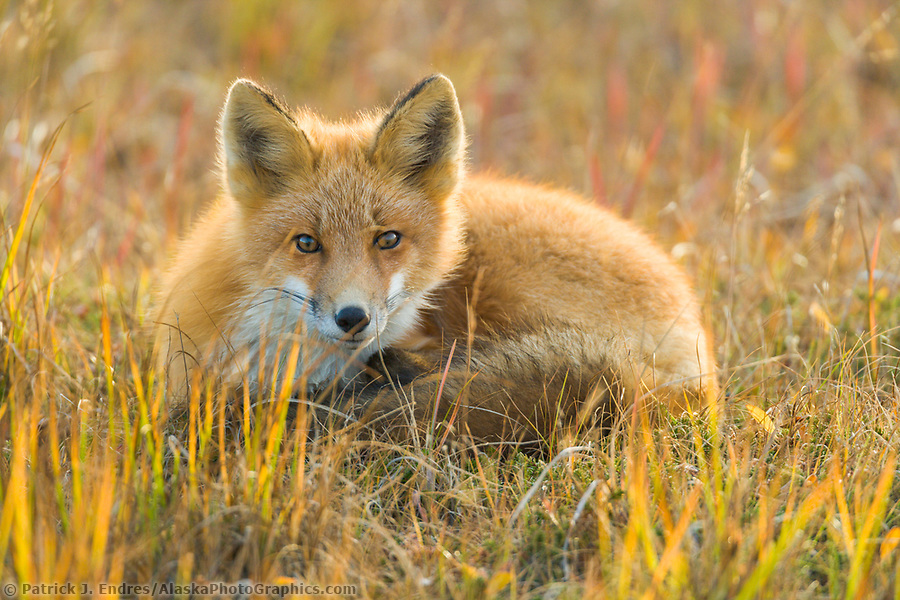 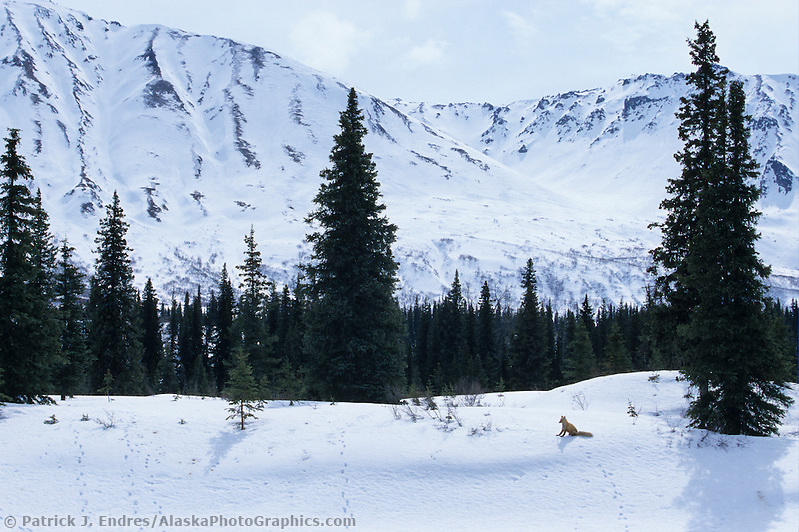 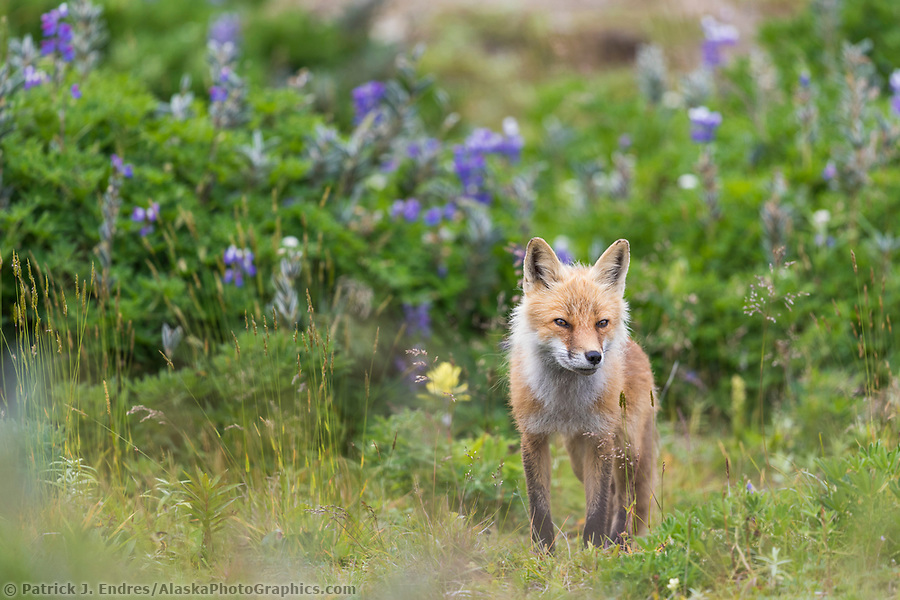 The red fox is usually recognized by its reddish coat, its white-tipped tail, and black “stockings,” although the species does have many color variations. Red is the most common color, but the hair may range from light yellowish to deep auburn red, black, silver, and mixes of all these colors. Several color phases can occur in one litter. The outside of the ears may be black-tipped, while the inside is usually white. The white tip on the tail will distinguish this fox from other species, regardless of its color phase. Red foxes are referred to by their color phase (i.e., red, cross, silver, black). 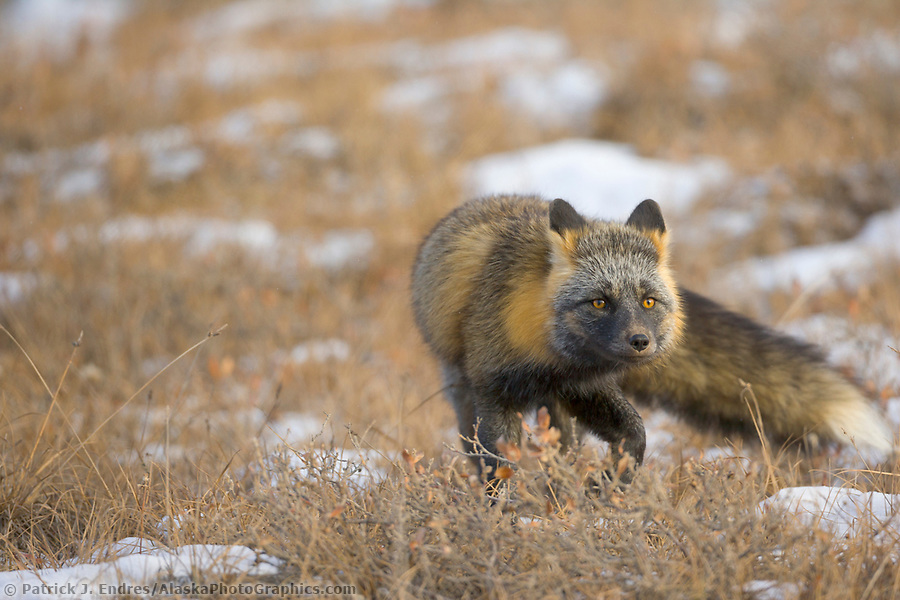 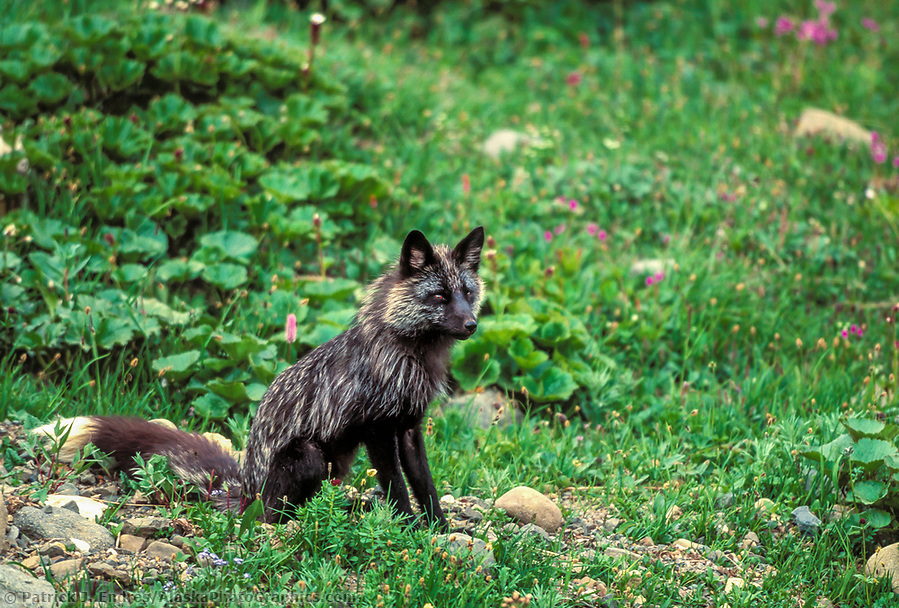 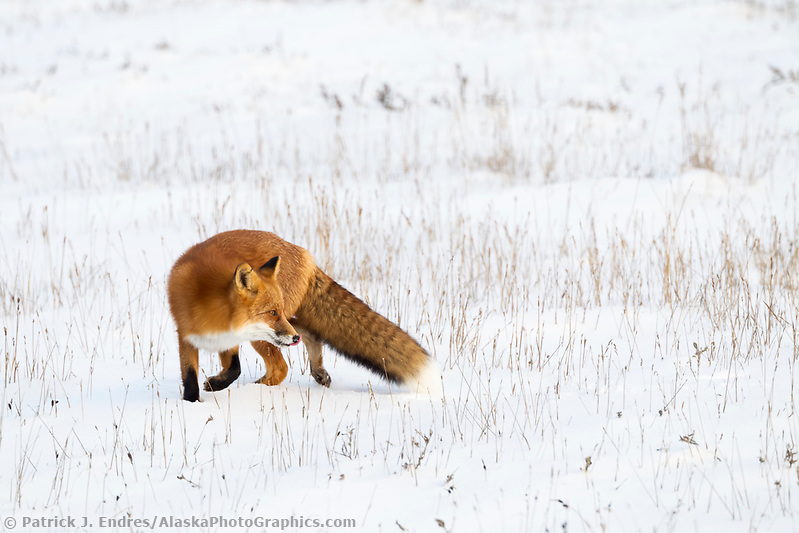 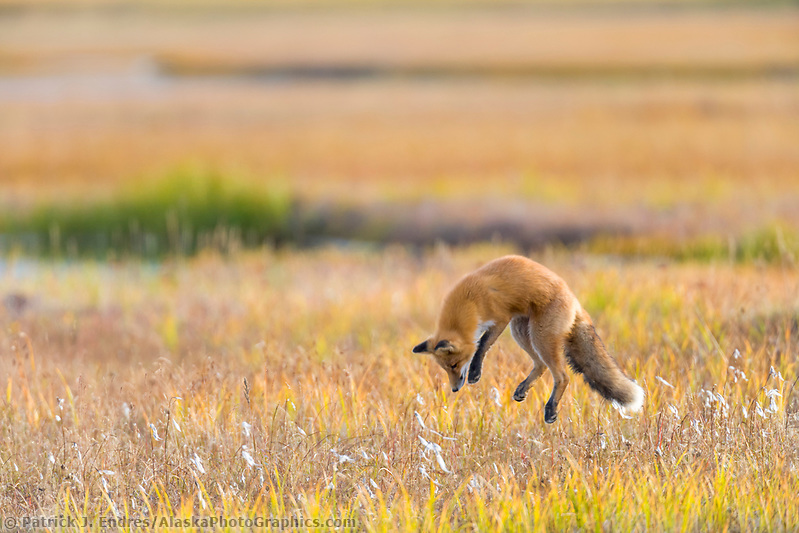 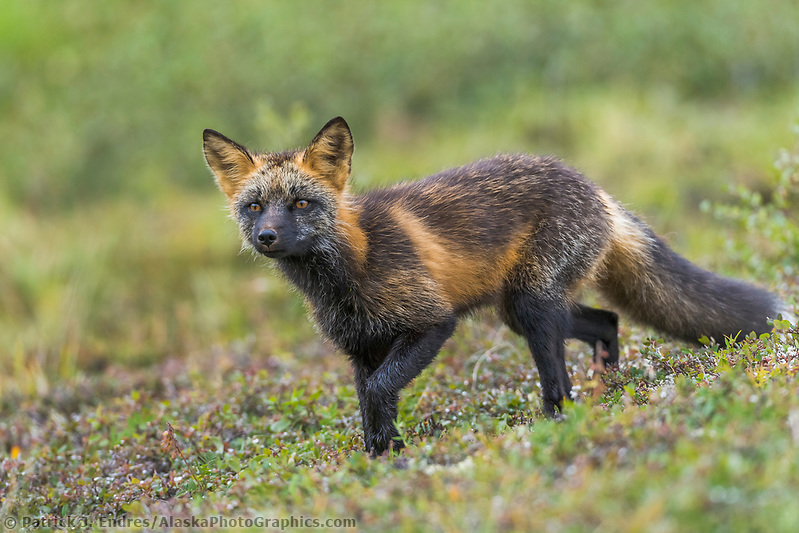 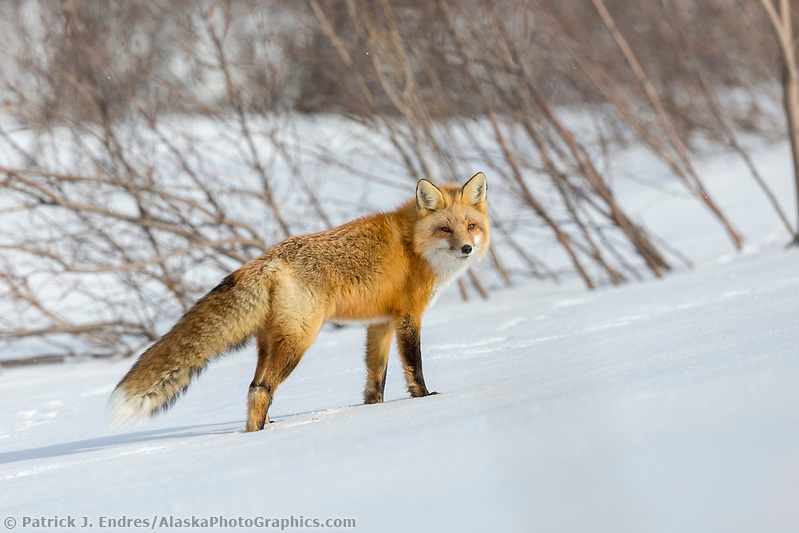 Red foxes breed during February and March. The den is a hole in the earth, 15 to 20 feet long, usually located on the side of a knoll. It may have several entrances. Sometimes foxes dig their own dens. More often, though, they appropriate and enlarge the homesites of small burrowing animals, such as marmots. They also will use abandoned wolf dens. Within the den is a grass-lined nest where kits are born after a gestation of 53 days. At birth, kits weigh about 4 ounces. The young leave the den for the first time a month later. The mother gradually weans them, and by the time the kits are 3 months old, they are learning to hunt. Both parents care for the young. The family unit endures until autumn when it breaks up and each animal is on its own. 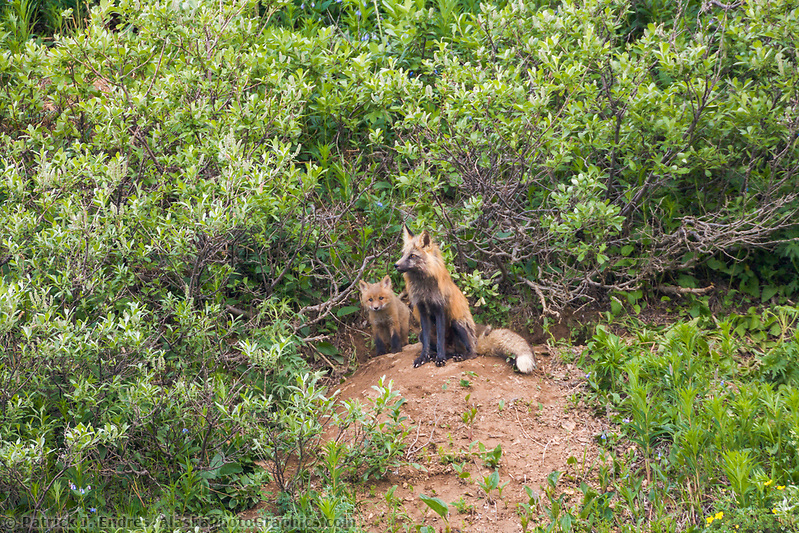 The red fox is omnivorous. Although it might eat muskrats, squirrels, hares, birds, eggs, insects, vegetation, and carrion, voles seem to be its preferred food. Fox will cache excess food when the hunting is good. They return to these storage sites and have been observed digging up a cache, inspecting it, and reburying it in the same spot. Apparently, they want to be sure that their food is still there. 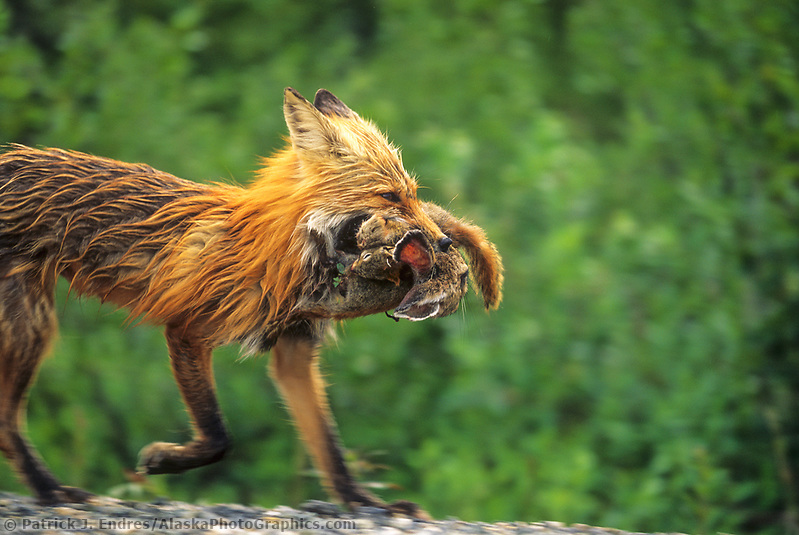 Text adapted from the Fish and Game Wildlife notebook series