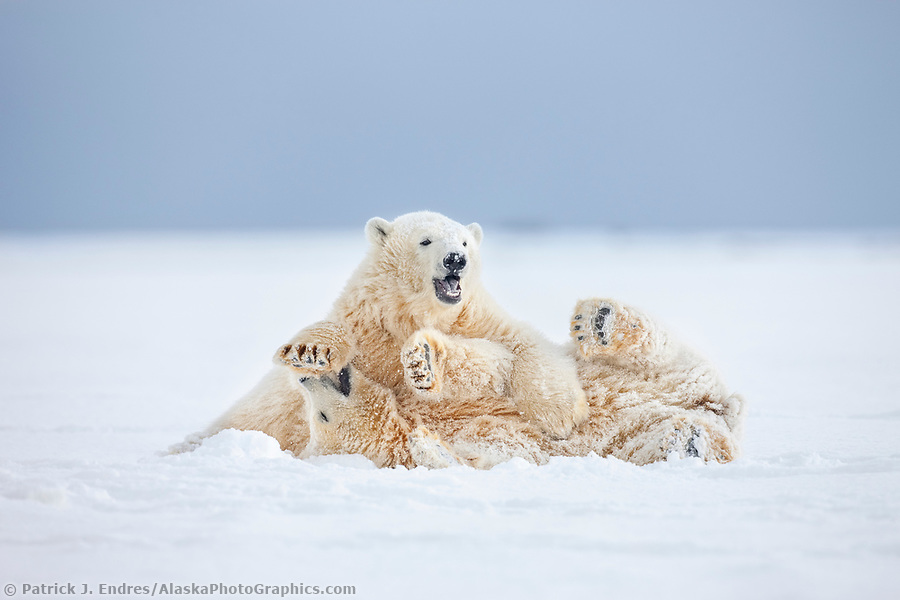 The polar bear, or Nanook in the Inupiat language of Alaska’s Arctic indigenous peoples, is truly the lord of the Arctic. It has adapted to survival in one of the most severe environments on earth. To watch and photograph this animal walking along an arctic shore and then directly into a frigid ocean and start swimming amidst chunks of ice is nothing less than mystifying. The polar bear photos on this site are predominantly of the southern Beaufort Sea population along Alaska’s far northeast Arctic Coast. All images may be licensed as stock photos for business use, or purchased as fine art prints for your home or office decor. 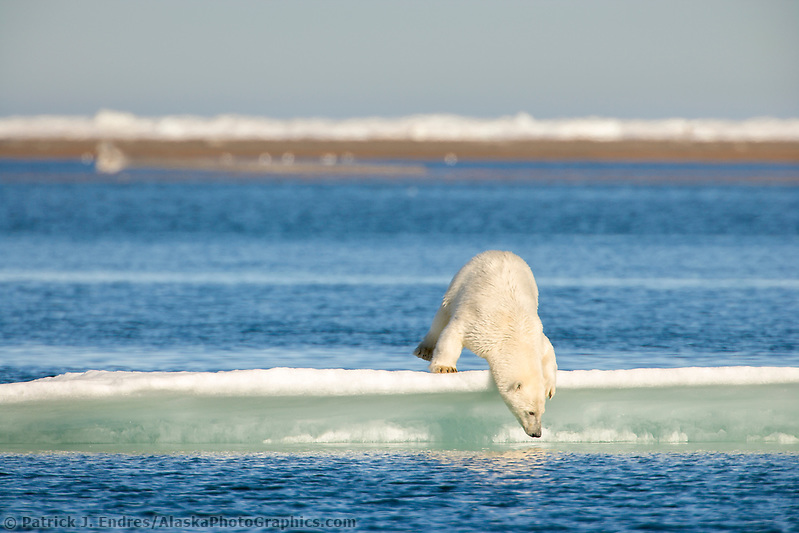 Polar bear on an iceberg in the Beaufort Sea, off the coast of Barter Island, Kaktovik, Alaska (Patrick J Endres / AlaskaPhotoGraphics.com)

Polar bears are whitish to ivory in color, with large feet, and a long and slender neck designed for efficient swimming. They have an acute sense of smell which they use to hunt and find seals on the open ice pack. They are typically solitary animals living alone on the ice pack but can tolerate community gatherings when significant food is present. The Polar bears are related to the brown bear as they share a common ancestor. Adult males average 600 to 1,200 pounds (273-545 kg) but may reach 1,500 pounds (680 kg). They average between 8 and 10 feet (2.4-3.0 m) in length. Mature females weigh 400 to 700 pounds (182-318 kg). Bears typically live about 25 years. 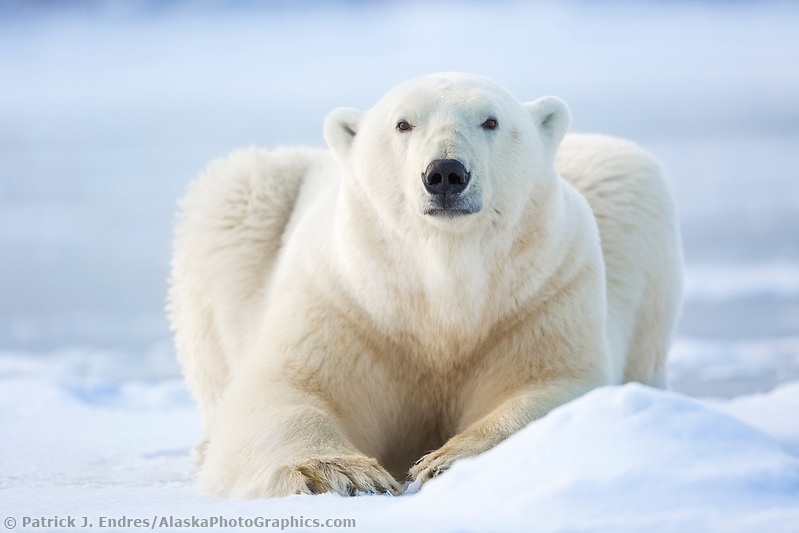 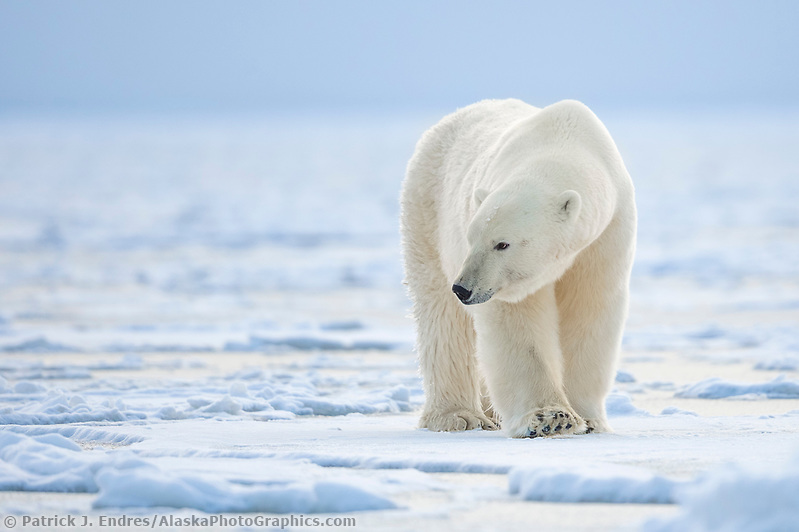 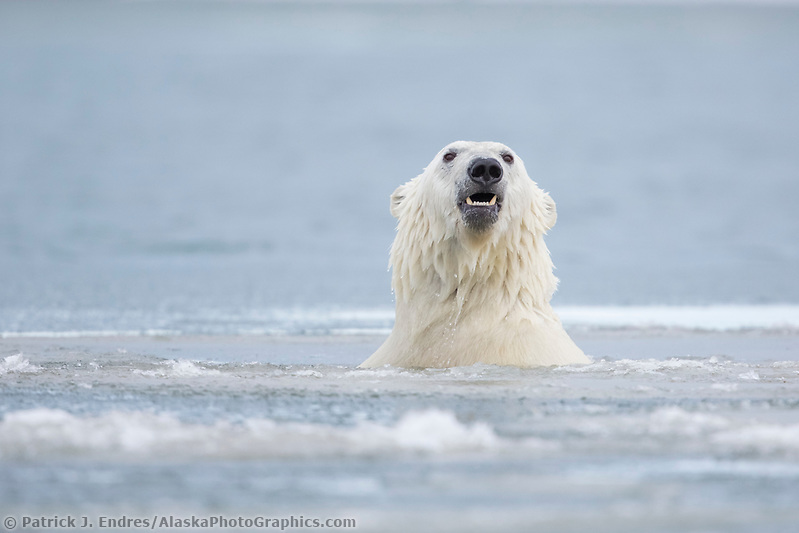 Male polar bears begin seeking out females in late March through May, by following their tracks on the sea ice. Bears are polygamous, and the male remains with a receptive female a relatively short time and then seeks another female. Females can produce litters every third year.

Pregnant females begin denning on land and on the sea ice in late October and November. She excavates a depression in the snow under a bank, on a slope, or near rough ice and enlarges the den as drifting snow accumulates. A litter of two cubs is the most common, born in December. 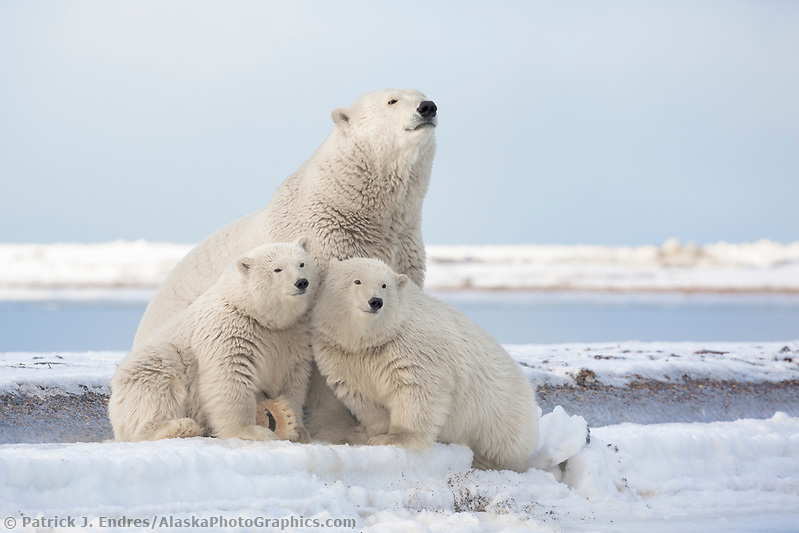 The female and cubs emerge from the den in late March or early April when cubs weigh about 15 pounds (6.8 kg). They make short trips to and from the open den for several days as the cubs become acclimated to outside temperatures. They then start traveling on the drifting sea ice. Cubs most commonly remain with the mother until they are about 28 months old. 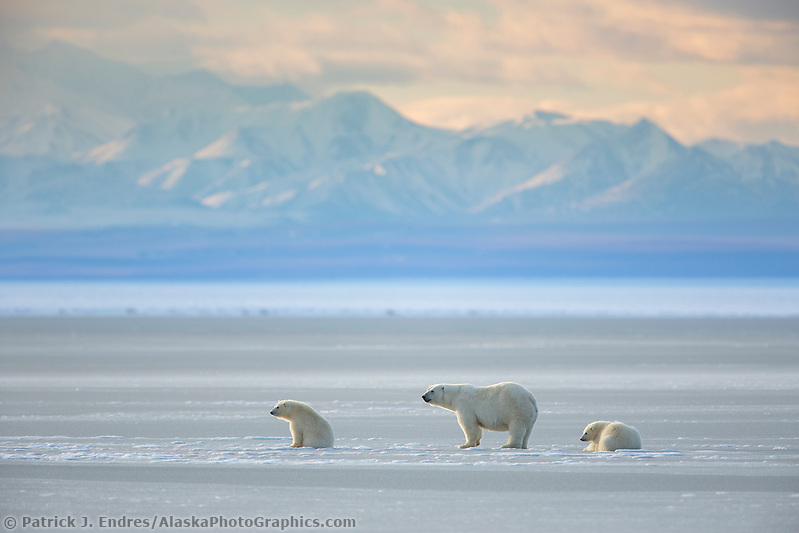 Polar bears are most abundant near coastlines and the southern edge of the ice, but they can occur throughout the polar basin. They make extensive movements related to the seasonal position of the ice edge. In winter, bears off Alaska commonly occur as far south as St. Lawrence Island and may even reach St. Matthew Island and the Kuskokwim Delta. During the summer, bears occur near the edge of the pack ice in the Chukchi Sea and the Arctic Ocean, mostly between 70° and 72° north latitude. Some denning occurs along the north Alaska coast, especially within the Arctic National Wildlife Refuge and on the adjacent sea ice. Off Alaska’s coast, there are two polar bear populations. 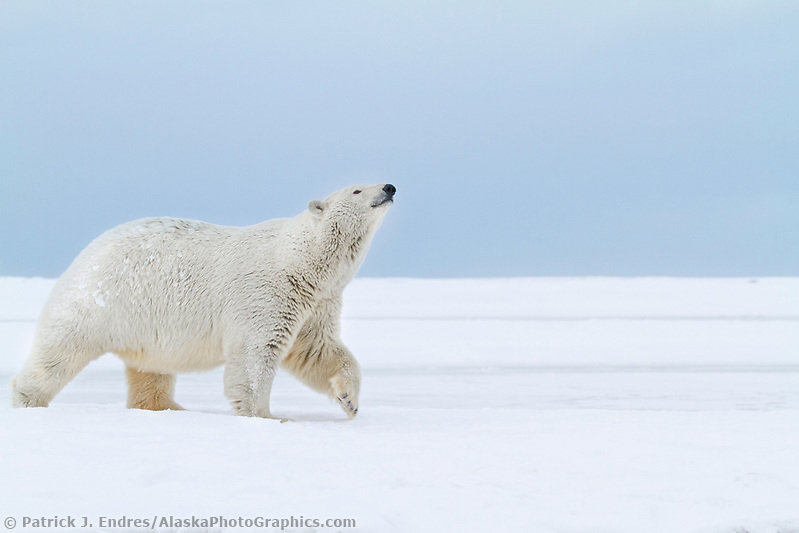 The main food of the Alaska populations is the ringed seal. Bears capture seals by waiting for them at breathing holes and at the edge of leads or cracks in the ice. They also stalk resting seals and catch young seals by breaking into pupping chambers. A keen sense of smell, sharp claws, powerful strength and speed, and the camouflaging white coat aid them in hunting.

Bears prey to a lesser extent on:

On Alaska’s north coast, polar bears gather in late summer to feed on the carcasses of Bowhead whale discarded by the Inupiat villages. The indigenous communities hunt whales under management by the World Eskimo Whaling Commission. 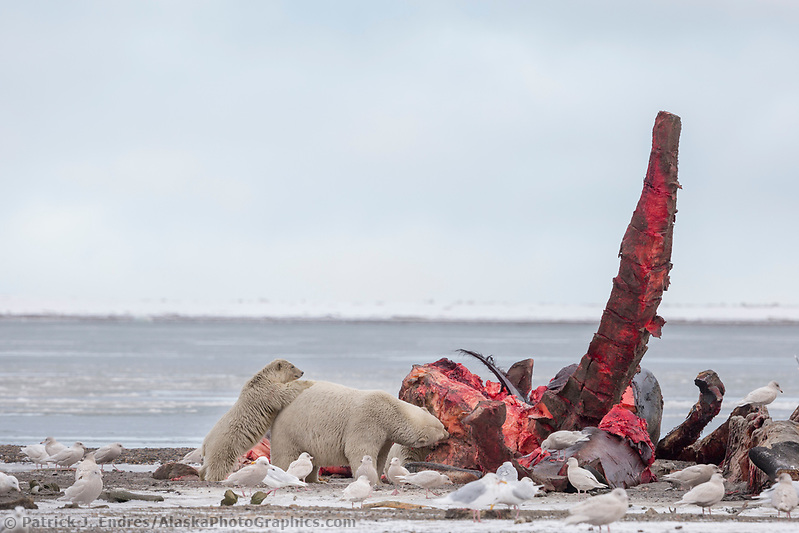 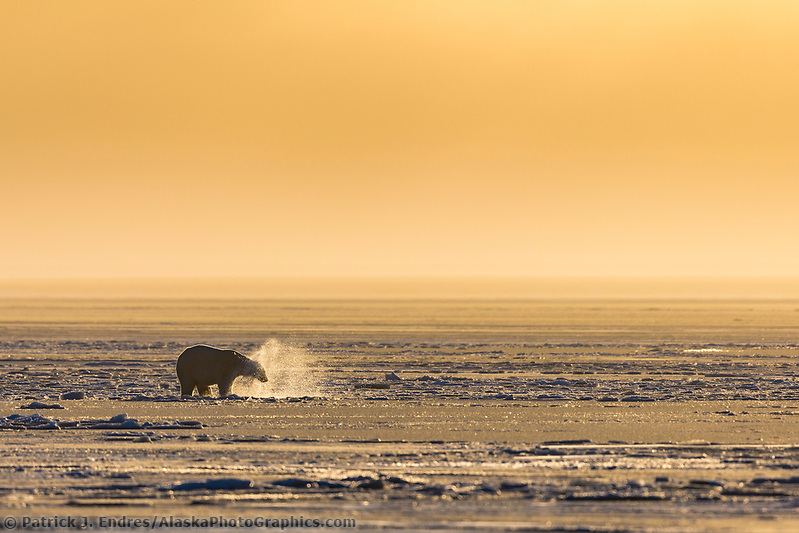 In Alaska prior to the late 1940s, nearly all polar bear hunting was by Eskimos with dog teams. Hunting, sometimes with the use of aircraft, started in the late 1940s and continued through 1972 when Alaska prohibited the use of aircraft. With the passage of the Statehood Act, Alaska began a polar bear management program. State regulations required sealing of skins, provided a preference for subsistence hunters, and protected cubs and females with cubs. 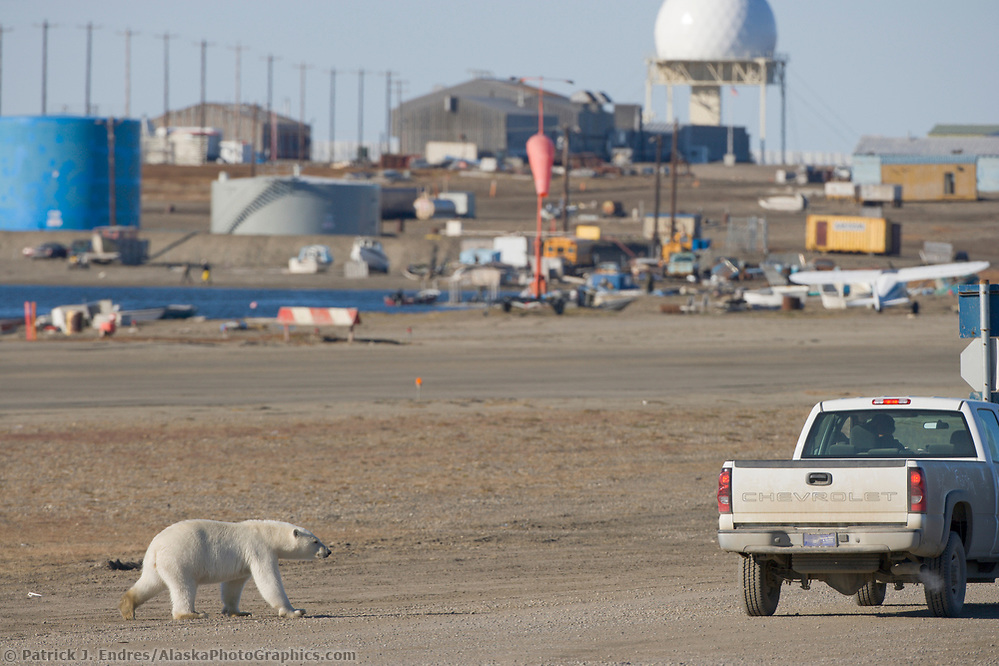 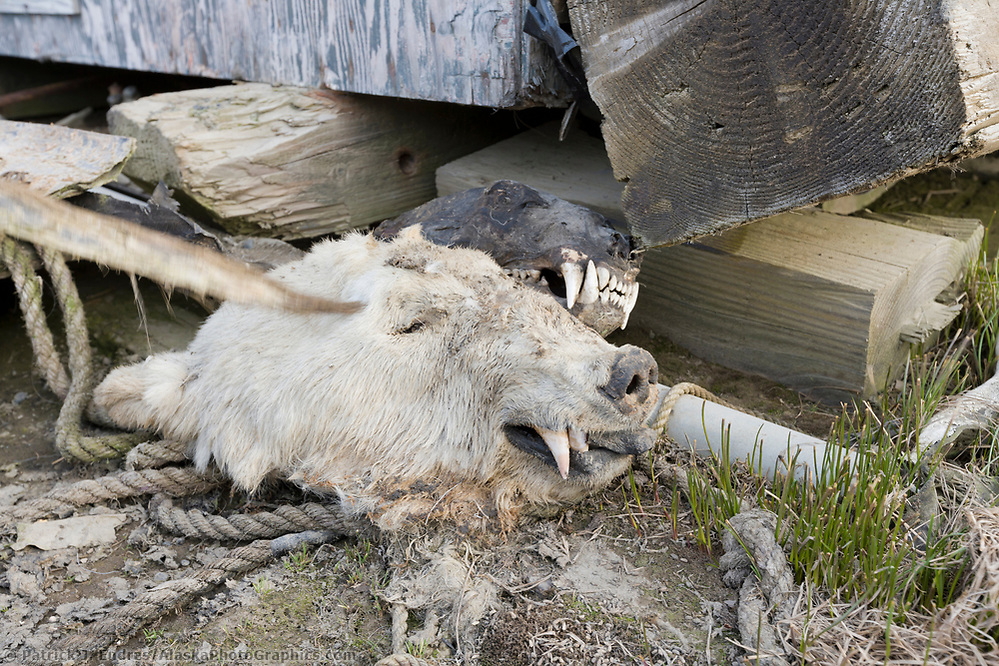 The MMPA of 1972 transferred management authority from the state to the federal government and placed a moratorium on the hunting of marine mammals by people other than Alaska Natives. This resulted in a reduced total harvest, but an increase in the proportion of female bears and cubs. The MMPA includes provisions that allow for waiver of the moratorium or transfer of management authority back to states. At intervals since 1972, the state of Alaska has made efforts at regaining polar bear management. State management could allow a resumption of sport hunting and produce increased economic opportunities in coastal rural communities. For a variety of reasons, efforts to regain state management have been discontinued. 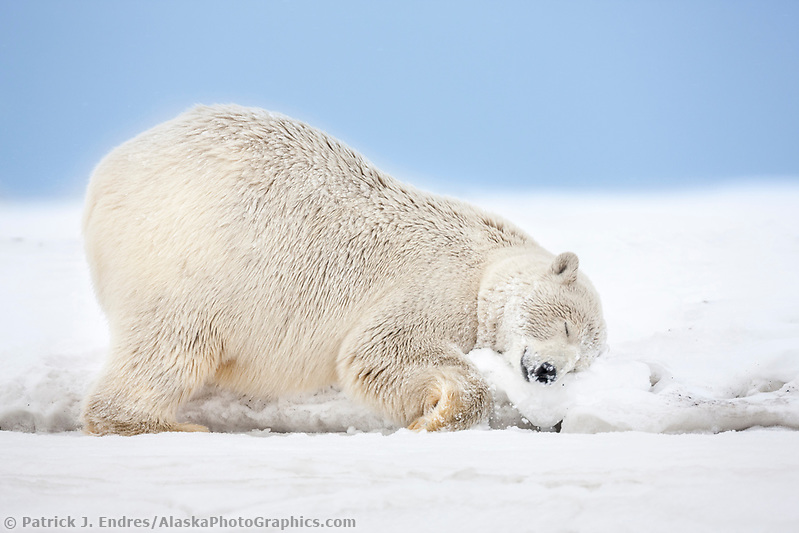 Female polar bear rubs her neck in the snow on an island in the Beaufort Sea on Alaska’s Arctic coast. (Patrick J. Endres / AlaskaPhotoGraphics.com)

Representatives of the five polar bear nations prepared an international agreement on the conservation of polar bears in November 1973. The pact was ratified in 1976. It allows bears to be taken only in areas where they have been taken by traditional means in the past and prohibits the use of aircraft and large motorized vessels as an aid to taking. The agreement has created a high seas polar bear sanctuary but does not prohibit recreational hunting from the ground using traditional methods. In Canada, recreational hunting of polar bears currently provides significant economic benefits to Native people. 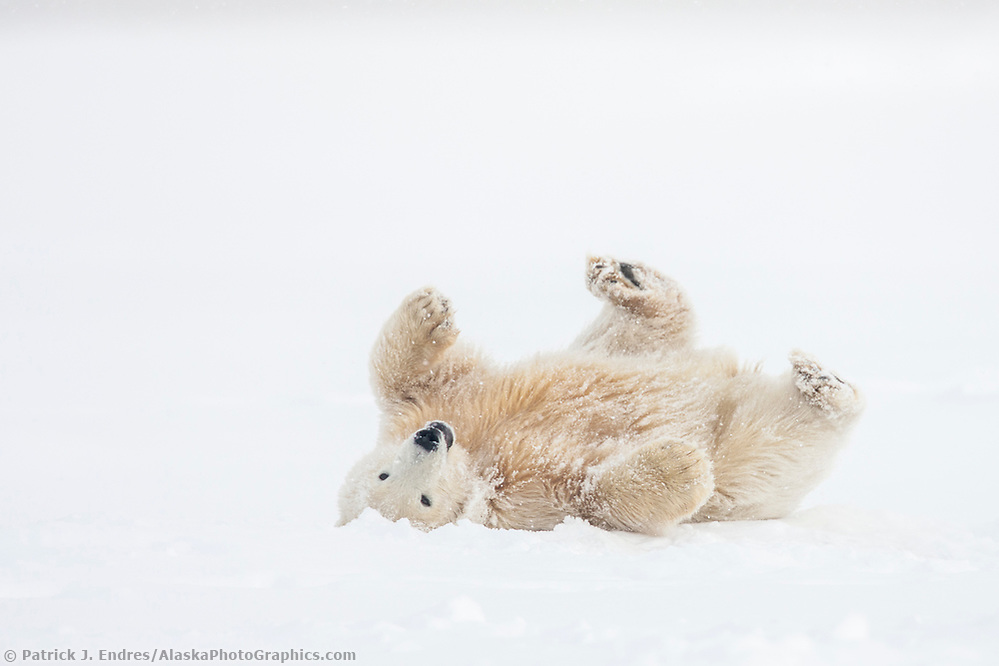 Degradation to polar bear habitat is currently of more concern than effects of hunting on populations. Human activities, especially those associated with oil and gas exploration and extraction, pose the greatest immediate threat. Oil exploration and drilling activities in denning areas could cause bears to den in less suitable areas. Oil spills from offshore drilling and transportation of oil through ice-covered waters could contaminate bears and reduce the insulating value of their fur, or adversely affect animals in the food chain below them. Severe environmental conditions would hinder or prevent containment of a spill, and currents and ice movement could distribute oil over large areas. 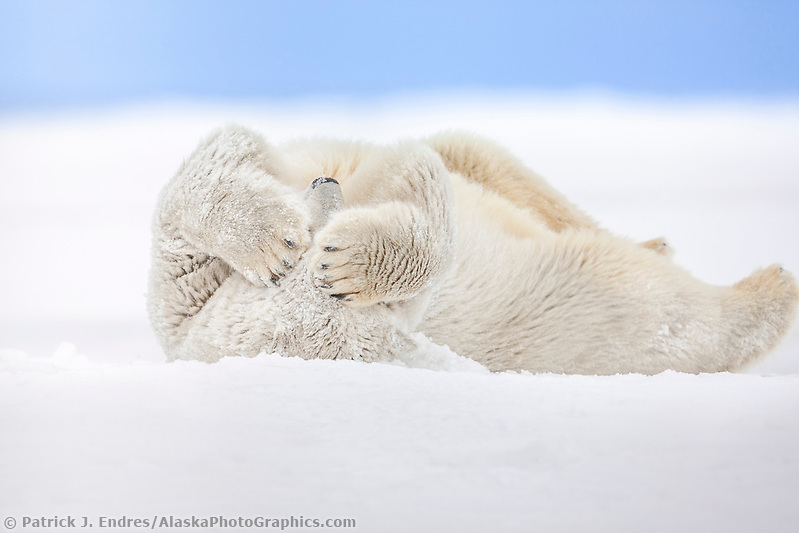 Polar bear covers its face with its large paws while rolling in the snow on an island in the Beaufort Sea on Alaska’s Arctic coast. (Patrick J. Endres / AlaskaPhotoGraphics.com)

Polar bears have become a popular subject for wildlife photographers. They are as amazing to watch as they are fun to photograph. In Alaska, the Arctic coast along the Beaufort sea offers some unique photo opportunities. The Arctic Village of Kaktovik has developed a small industry in polar bear tourism. The bears congregate near the village to feed on bowhead whale carcasses while they wait for the sea ice to form. During this time, residents of Kaktovik offer tour access to the bears via small boats where photography can occur from a safe distance. 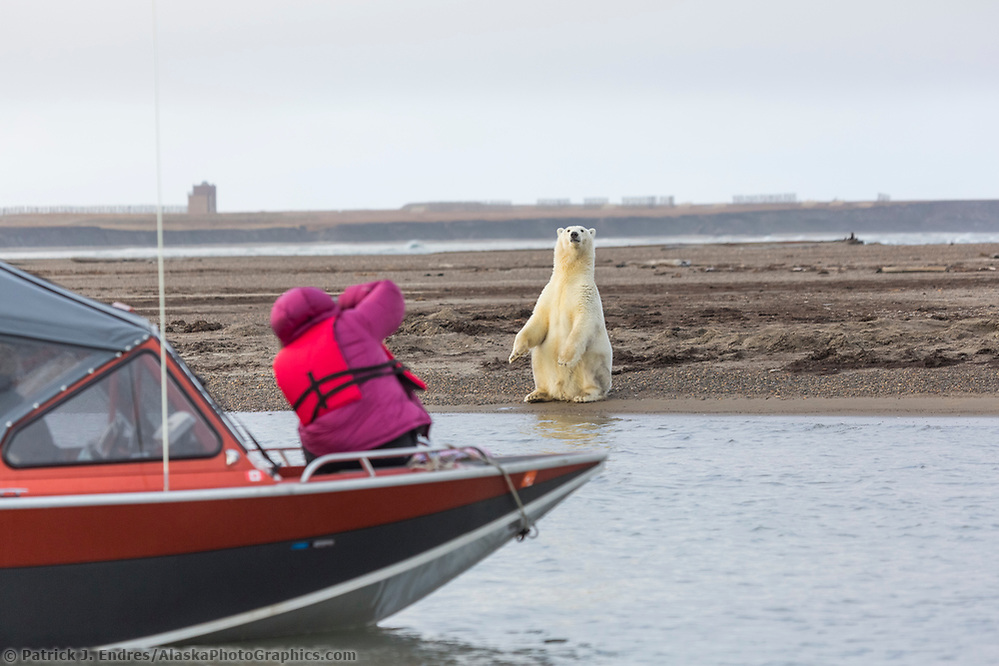 A photographer takes a picture of a polar bear from a boat along Alaska’s Arctic coast. (Patrick J Endres / AlaskaPhotoGraphics.com)